Relentless Glue is the fourth upgrade of Path 3 for the Glue Gunner in Bloons TD 6. It allows bloons to leave a blob of glue on the track upon being popped. Blobs left on the track will last for 5.0 seconds before disappearing, and can glue up to 1 bloon regardless of crosspaths. These track blobs can affect camo, even though the original projectiles do not. These blobs can additionally apply MOAB Glue effects onto MOAB-class bloons, although due to the pierce of each glue blob it is hardly noticeable. The blimp slowdown remains at 37.5% slowdown from the MOAB Glue upgrade, but its glue priority is, in general, one level higher than MOAB Glue, according to the glue prioritization system.

The glue blobs produced by popped bloons are on-track, at least in general scenarios (outside of additional status effects such as blowback), and can detect camo.

Relentless Glue is another method for the Glue Gunner to counteract its initial lack of proficiency against large groups of bloons, in that it can coat one bloon and transmit to a second target once it is popped. This is crucial, as it allows the Glue Gunner to benefit from the prior upgrade MOAB Glue.

In tandem with its slowing prowess to normal and MOAB-Class Bloons, Relentless Glue can reinforce a good chokepoint where bloons are rapidly destroyed from tower fire, creating more glue blobs on the track to slow those that sneak through. In essence, an effectively used Relentless glue combines the powers of all three paths, lasting longer and slowing more, soaking through layers, and hitting multiple bloons. 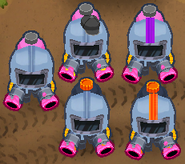 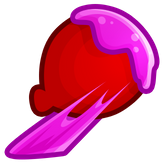