For the BTD3 and BTD5 counterpart, see Red Hot 'Rangs.

The base upgrade gives the Boomerang Monkey an orange jumpsuit with a yellow stripe on its chest and a yellow arrow on its head, and red accents.

The following is a list of statistics of a Boomerang Monkey with Red Hot Rangs. It includes its base statistics and all associated crosspathing interactions. Expand the box on the right to see further information.

The following are a list of wiki-written damage types associated by a Boomerang Monkey with Red Hot Rangs. These damage type statistics include how it attacks and how these attacks would affect bloons. Expand the box on the right to see further information.

More damage and pops Lead. For early-game, useful for popping stronger bloons. As a crosspath, often the best crosspath for top path and situational crosspath for middle path. 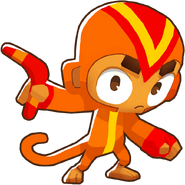 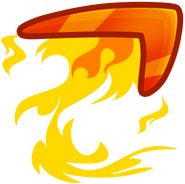