For the BTD6 upgrade of the same name, see Red Hot Rangs (BTD6).

Red Hot 'Rangs is an upgrade for the Boomerang Monkey (Boomerang Thrower in BTD3 and BTD5) in BTD3, BTD5. Across all games, it allows the tower to pop Frozen Bloons and Lead Bloons. It also changes the color of the boomerang from brown to hot red.

In BTD3, it debuted as Thermite, which allows the Boomerang Thrower to pop Leads. It has not appeared in BTD4, but has made a return in BTD5, returning as Red 'Hot Rangs. In BTD5, it is the second upgrade of Path 2.

Thermite is an upgrade for the Boomerang Monkey in BTD3. It is the second upgrade of Path 2. It allows the Boomerang Thrower to pop Lead Bloons. It costs $100 on Easy, $120 on Medium, and $130 on Hard.

(insert description of what tower does)

(insert description of what tower does)

Glitch in BTD5 Mobile where artwork is bald. 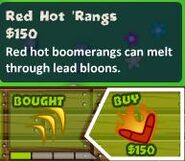 BTD5 Mobile/BTDB Mobile upgrade
Add a photo to this gallery

Retrieved from "https://bloons.fandom.com/wiki/Red_Hot_%27Rangs?oldid=272919"
Community content is available under CC-BY-SA unless otherwise noted.