Recursive Cluster is the fourth upgrade of Path 3 for the Bomb Shooter in BTD6. It allows the Bomb Shooter to shoot tertiary bombs every second shot. Visually on every second shot, all 8 clusters will explode into 8 more clusters, totalling to 64 bombs. But in reality the tertiary explosions are just one single large radius explosion exploding about half a second later, which means there is only large explosion that deals 1 layer of damage with 60 pierce each. 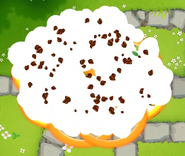 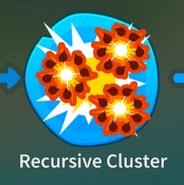 Retrieved from "https://bloons.fandom.com/wiki/Recursive_Cluster?oldid=255360"
Community content is available under CC-BY-SA unless otherwise noted.