This upgrade changes the main body's color from black to red, and it loses the second reinforce band. The first reinforce band is now yellow. Its wheels remain dark grey.

The bomb projectiles themselves are now much larger and orange.

When given Frag Bombs, the frags drastically improve, dealing 3 damage, with 2 pierce, and the total number increases from 8 to 12. They also last longer, and have larger hitboxes. Fragments last for 0.257s instead of 0.191s, and projectile size of each fragment increases from 2 to 3.

Really Big Bombs serves mostly as a stepping stone towards Bloon Impact. It deals increased damage overall and therefore it can be used to reduce stronger non-MOAB-class bloons into weaker groups. Really Big Bombs is usually less favored over alternate options, especially Cluster Bombs, due to the latter being more versatile at cleaning up weaker groups of bloons rather than ripping open tougher layers as Really Big Bombs is designed to do.

Its main niche is to rip open groups of tougher bloon layers into weaker groups. The high damage packed into single large explosions can be used to split large groups of stronger bloons into multiple weaker clumps, where other towers can clean up the groups of weaker bloons spawned out from the parent bloons. Really Big Bombs explosions are quite large, but they are still smaller than the combined blasts of a Cluster Bombs with Bigger Bombs, and Cluster Bombs is more reliable at cleaning up bloons in general.

One notable aspect of Really Big Bombs is that its explosions deal enough damage to Rainbow Bloons such that they do not spawn any Zebra Bloons or Black Bloons, even if the explosions cannot pop Blacks or Zebras. The other noteworthy aspect is the much improved fragments from the 3-0-2 crosspath, the greatly increased damage and fragment counts in particular doing potentially greater damage than 2-0-3 Cluster Bombs when given additional buffs, but slightly more expensive.

Overall stronger than it did when it was first released, mostly due to Cluster Bombs fulfilling a similar role at a much cheaper cost. Really Big Bombs now specializes at producing high damage against dense groups of bloons with a single large explosion, which can compete versus the multiple clusters of smaller explosions as Cluster Bombs would specialize. Starting from Version 31.0, which buffed the 3-0-2 crosspath, 3-0-2 Really Big Bombs spam has become a viable but not meta strategy on CHIMPS, with an underlying formula that closely resembles Cluster Bombs spam. 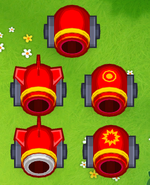 3-0-2 Frags with the Fraggy Frags MK (pre-31.0). Some of the frags either collided with walls or reached pierce cap. 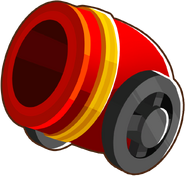 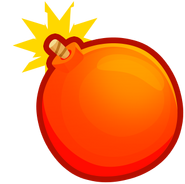