Re-Freeze is the second upgrade of Path 3 for the Ice Monkey in Bloons TD 6. It allows the Ice Monkey to reapply a new freeze status effect to Frozen Bloons, regardless of what tower caused the freezing.

This upgrade gives the Ice Monkey sunglasses and its gloves are a darker grey.

Re-Freeze produces freezing blasts in a zone-like style. Technically, the Ice Monkey is locked on the Close targeting priority. However, for simplicity reasons, this monkey has no targeting priorities.

Re-Freeze allows the Ice Monkey to freeze bloons that are already frozen. Giving it extra attack speed allows it to perma-freeze bloons in place, especially useful against Super Ceramics. This is especially so for 0-2-2 Ice Monkeys, which are valuable in the late-game thanks to its very powerful stalling power for an incredibly low cost.

0-1-2 Ice Monkey (and later 0-2-2 Ice Monkey due to further nerfs to 0-1-2) strives in the late-game thanks to its superior Super Ceramic stalling, but it and its previous upgrade got price nerfs to counter this. 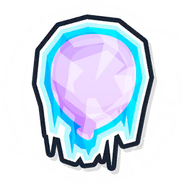