Not to be confused with a similar upgrade in BTD3.

Razor Sharp Shots is an upgrade for Dart Monkey in BTD5 and BTD6. This upgrade makes these darts have +2 extra Pierce, totalling to 4 bloons (BTD5) and 5 (6 with Monkey Knowledge) in BTD6.

- In game: The Dart Monkey gains a red tail-band.

- Icon: a dart is pointed to the top right corner with three sparkles indicating a sharper dart. Dart Monkey's body is in a position after a javelin throw. Additionally, he squints its left eye for "a shot" with the dart leaving its hand recently with the aforementioned red tail-band. (BTD6) 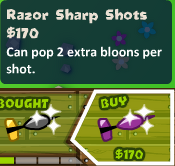 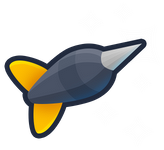 Retrieved from "https://bloons.fandom.com/wiki/Razor_Sharp_Shots?oldid=269068"
Community content is available under CC-BY-SA unless otherwise noted.