Razor Rotors is the third upgrade of Path 1 for the Heli Pilot in Bloons TD 6. It allows the Heli Pilot's sharp rotors to hit bloons on contact, popping and dealing 2 damage every 0.75s within a radius of 35. The Razor Rotor attack can also pop Lead Bloons and Frozen Bloons. Razor Rotors have 10 pierce per cycle.

Razor Rotors adds the eponymous rotors to the Heli, adding a light grey sharp edge to the end of each rotor. It also extends the wings outward and adds a red stripe to both of them, and gives the Heli a sharper nose.

Path 2 crosspathing adds an additional yellow and green tail rotor, then paints the ends of the wings yellow.

Path 3 crosspathing adds a yellow or green chevron to each wing.

Razor Rotors gains the eponymous attack, which functions as a source of Contact Damage, dealing 2 damage with up to 10 pierce every 0.75 seconds; the Rotors are also Normal type, able to pop any bloon type.

It additionally has a unique mechanic involving Pursuit: the Heli Pilot now moves much closer to the front of the first bloon, therefore allowing the Razor Rotors to deal their damage more consistently with Pursuit active.

Razor Rotors provides some extra grouped popping power that the Heli Pilot may tend to lack in its earlier upgrades. Compared to other anti-lead options, Razor Rotors is quite expensive, but with the extra damage buff in Version 24.0 it is quite effective as area-of-effect with mobility.

The strength of Razor Rotors was initially similar to how it was in BTD5 when it was first released in BTD6. It was buffed later on to improve its blade reliability when interacting with Pursuit targeting, and gained extra damage to make it more worth the price as an area-of-effect with mobility. Since Pursuit had previously felt counterintuitive for Razor Rotors, Pursuit was reworked exclusively for Razor Rotors to go much closer to the bloons. 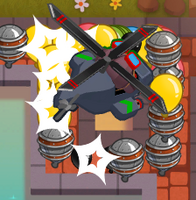 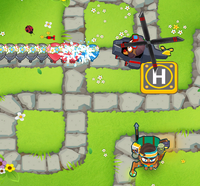 Razor Rotors on Pursuit, following closer to the bloons (Version 31.0, Geraldo for reference) 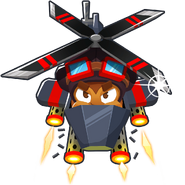 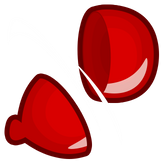