Ray of Doom is the final upgrade of Dartling Gun on Path 1, costing $46750 on Easy, $55000 on Medium, $59400 on Hard and $66000 on Impoppable. It allows the Dartling Gun to shoot a persistent beam that pops all bloons in its path. Unlike other upgrades, the Ray of Doom upgrade slows down the turning speed of the Dartling Gun, unless on the mobile or console versions.

The Ray of Doom has a pierce of 100 (Infinite in Mobile and Steam), popping bloons every frame (about 30 times per sec on good devices); even Ceramic Bloons are popped in well under a second. This upgrade is probably one of the best upgrades for popping normal Bloons, being a tower with one of the highest pierce caps in the entire game.

In Bloons Monkey City, researching the Ray of Doom requires the Crystal Fusion Array. It costs

Ray of Doom is super powerful at destroying regular bloons, but it tends to be somewhat weak at handling MOAB-class bloons. However, it has incredible attack speed to compensate, attacking fast enough to become a suitable solo tower. Paired with other Rays of Doom, they are actually quite efficient in terms of minimized lag versus high DPS. 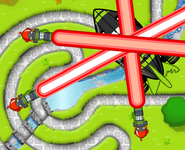 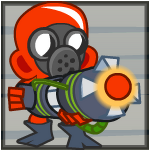 BMC icon of Ray of Doom

Retrieved from "https://bloons.fandom.com/wiki/Ray_of_Doom_(BTD5)?oldid=273578"
Community content is available under CC-BY-SA unless otherwise noted.