The Rainbow Bloon is a bloon that originally appeared in Bloons Tower Defense 2 and has appeared in every other BTD game since. It is the parent of two Black and White Bloons in BTD2 and BTD3, and the parent of two Zebra Bloons in BTD4, BTD5, and BTD6. Rainbow Bloons are quite fast, having a relative speed of 2.2 compared to a Red Bloon. They are faster than White Bloons but still slower than Ceramic Bloons. In the original Bloons, there is a Helium Bloon, which is also rainbow colored and is often confused with this type of bloon. It first appears on round 12 in BTD2 and BTD3 and on round 35 in later games.

The Rainbow Bloon is one rank above Zebra Bloon (or Black Bloon and White Bloon prior to BTD4) in Bloons TD games. It is slightly faster than a Green Bloon and leaks 47 lives (37 lives pre-BTD4) if it reaches the exit. As per the multi-layer health system, a popped Rainbow Bloon splits into two Zebra Bloons when affected by an attack that deals 1 damage. More damage pops the Rainbows Bloon into its descendants, following the multi-layer health system of many bloons in the game. The Rainbow Bloon's parent is the Ceramic Bloon.

In Bloons TD games and Bloons Pop!, the Rainbow Bloon lacks any immunity but possesses offspring with relentless immunity against explosive and freezing. In most games, except BTD5 Mobile and other mobile counterparts, a Rainbow Bloon dealt with more than one damage can bypass explosion-immune and freeze-immune layers regardless of damage type of that attack. An example of this is Really Big Bombs popping a Rainbow into 8 Pink Bloons with an explosion dealing 3 damage, despite the explosion being unable to deal damage to Blacks or Zebras directly.

Rainbow Bloons can be sent starting from Round 12. Spaced Rainbows cost $80 and give 3 eco per slot, each slot sending one Rainbow with small spacing. Grouped Rainbows replace the Spaced Rainbows option on Round 13, and cost $250 for 4 moderately grouped Rainbows, and increases the reward to 5 eco.

Natural Rainbows start appearing on Round 18 (?).

Rainbow Bloons have no particular bloon weaknesses, as stated on the Bloonspedia entry for Rainbow Bloon. However, it has many descendants of bloon. Its direct child is the Zebra Bloon, followed by a 50-50 chance of either a White Bloon or Black Bloon.

Rainbow Bloons are relatively strong bloons because, although its own layer is easy to pop, it can spawn a large total of bloons, summing up to 47 bloons per Rainbow Bloon. It is also relatively fast too, having a relative speed of 2.2 compared to a Red Bloon. Many towers or towers with high upgrades are well recommended to dealing with these bloons.

In Rounds 86+ in BTD5, Rounds 30+ in both Bloons Monkey City Flash and Mobile, Rounds 35+ in BTDB Flash, Rounds 43+ in BTDB Mobile, and Rounds 81+ in BTD6, with the introduction of Super Ceramics, Rainbow Bloons will only spawn one Zebra Bloon when popped. Additionally, that Zebra will only pop into one White Bloon, and that White will only pop into one Pink Bloon, greatly reducing the total amount of child bloons in late-game.

The following are all appearances on each round where Rainbow Bloons will spawn naturally from the entrance. These will not include the rounds where the Rainbow's parents or subsequent parents will feature.

Rounds marked in italics are marked as technically starting to appear on that round but only ever appear from getting released from parent bloons.

Rainbow Bloons are unlocked by the Multilayer Tech upgrade. It costs

The Rainbow Bloon (specifically the grouped version) has become notorious among players for being hard to defend, especially when paired with the regrowth property, having earned the nickname Regrow Rainbows Of Doom (RROD). However, it's since been nerfed overall via game updates to make it more costlier and less effective to send. 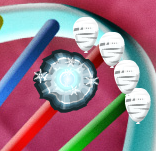 The result of Snap Freeze on Rainbow Bloons in BTD4.

A stream of Rainbow Bloons.

A massive amount of Regrowth Rainbow Bloons as a result of Regen Farming.