In BTD6, the Heli Pilot automatically changes to Pursuit Mode upon purchase of the upgrade. Unlike in BTD5, the Pursuit targeting has improved so that it will follow along the track as close as possible to the front of the bloon, compacting with other Heli Pilots on Pursuit in the order of whichever Heli Pilot went to Pursuit first.

Pursuit retains the four guns of Quad Darts, whilst painting the heli dark grey and adding a tail rotor. The pilot has a cheerful expression in the upgrade portrait.

When used as a crosspath, all changes to the Heli are retained.

Pursuit grants the Pursuit targeting option, which causes the Heli to automatically position itself in front of the first bloon, to the best of its ability.

Pursuit received insignificant changes since it was first released in BTD6. However, the Pursuit targeting option is now modified, its previous upgrade is now more expensive, and the Heli Pilot's base cost was slightly increased in later updates.

Lots of 2-0-0 Helis on Pursuit, locking themselves to follow the first bloon 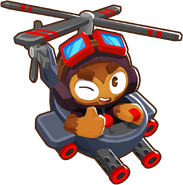 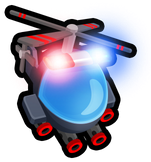