Immune to Energy, Fire, and Plasma Attacks
Slightly slower than a Yellow Bloon

The Purple Bloon is a bloon first introduced in Bloons Tower Defense 6 , appearing on rounds 25, 32, 45, 48, 62, 78 and 95. It also appears in Bloons Adventure Time TD. It has immunity to energy, plasma, and fire effects, is almost as fast as a Pink Bloon, is a parent of two pink bloons, and has an RBE of 11. It could be compared to the White Bloon and Black Bloon for its immunity to certain attacks; however, unlike them, the Purple Bloon has no parent bloon. It could also be considered the inverse of the Lead Bloon, which is immune to sharp objects, as well as the successor to Bloons Super Monkey 2's Glass Bloon, which is immune to energy attacks.

Without placing the affected towers within a Monkey Village with the upgrade Monkey Intelligence Bureau, or Tuxedo Jake with his Inspiring Melody upgrade in Bloons Adventure Time TD, the Purple Bloon cannot be popped by most fire or energy-based upgrades. The Purple Bloon is immune to the following towers and upgrades:

Although the Purple Bloon can be easily popped during early rounds, it can be quite dangerous during late rounds, especially on Round 95, where massive amounts of MOAB-Class Bloons appear and the player begins to rely on powerful towers that mainly use energy, fire, and plasma attacks, which the Purple Bloon is immune to. As a result, a group of Purple Bloons can pass through a player's defenses unnoticed, and cause the player to lose. Spike Factories could be used to block any Purple Bloons from escaping the player's defenses without trouble as they never utilize such attacks. Monkey Intelligence Bureau is also helpful for allowing towers to pop Purple Bloons. 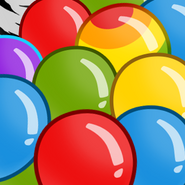 The Purple Bloon was first shown in a Bloons Tower Defense 6 sneak peek by Ninja Kiwi.