Bloons Wiki
Register
Don't have an account?
Sign In
Advertisement
in: Articles in construction with a WIP, Monkey Sub, Bloons TD 6,
and 8 more

Pre-Emptive Strike is the final upgrade for Path 2 for the Monkey Sub in Bloons TD 6. It automatically triggers a MOAB Assassin-esque effect whenever a MOAB-class bloon spawns from the entrance, dealing 750 damage to that blimp upon impact. In addition, its First Strike ability cooldown is reduced from 60 seconds to 45 seconds, initial cooldown from 20 seconds to 5 seconds, and its Ballistic Missile attack deals 10 damage plus another +15 to Ceramics and MOAB-class per missile and is shot every 0.5 seconds instead of every 0.9945 seconds.

Pre-Emptive Strike targets bloons using the standard target priorities. It has multiple types of attacks that are shot in different styles.

Darts are shot in a straight movement and automatically home at bloons with moderate seeking, having a tight seeking curve while traveling but does not make sharp turns. Ballistic missiles are shot in a lobbing style, launching in the air and crashing onto a target according to target priority prior to launching. First Strike ability missiles target in the same way as ballistic missiles, except are locked on Strong and can attack anywhere on screen. Pre-emptive missiles only target MOAB-class bloons and are targeted with a Pre-Emptive

Pre-Emptive Strike near-immediately deals damage to any blimp entering the screen, no matter how many of them. In addition, its high damage missiles make it acceptable at cleaning up after spawning a lot of Super Ceramics. Sub Commander combined with Pre-Emptive Strike is an acceptable combo on easier maps, destroying DDTs while providing damage to other bloons. However, it can struggle against ZOMG-dense rounds, though with a faster First Strike ability this weakness is partially mitigated.

When first released in the game, it was one of the most reliable options for stripping down ordinary DDT layers in late-game. With many other anti-DDT alternatives becoming viable later on as updates went by, Pre-Emptive Strike received a few additional price cuts and attack buffs in following updates to compete in its expertise. 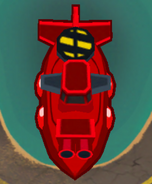 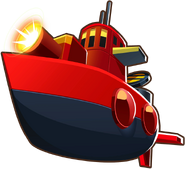 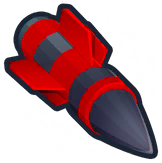 Pre-Emptive Strike passive ability missile when launched into the air