Powerful Darts is the second upgrade of Path 3 for the Dartling Gunner in Bloons TD 6. It increases projectile speed and size of the Dartling Gunner's projectiles by ~50%, increases pierce from 1 to 3, and gives frozen-popping for all its attacks. Pierce bonuses granted by Powerful Darts roughly increase by +50% for Tier 3 and above upgrades, among other bonuses such as +50% explosion radius for main rockets from Hydra Rocket Pods and above.

Powerful Darts changes the muzzle of the minigun into a singular barrel with three (or four with Advanced Targeting) holes, as well as recoloring the tripod to blue instead of black. In addition, the Dartling Gunner gains one yellow stripe (or green stripe with Faster Barrel Spin and later upgrades) each on opposite sides of his helmet. Darts are colored blue and all projectiles produce trails as they glide through the air.

Powerful Darts adds +2 pierce to the Dartling Gunner, for 3 total, and grants it Shatter type, allowing Frozen popping. It also increases projectile size by 50%, from 2 to 3.

Powerful Darts has several unique interactions when used as a crosspath:

Powerful Darts customly aims based on direction and angle of where the Dartling points towards. It shoots straight movement projectiles controlled in a aim-based mobile style guided by touch-based mobility, albeit with some erratic angular deviation.

Powerful Darts was changed slightly since first released in BTD6, initially with a nerf in price. It now also grants frozen-popping, likely inspired by its Battles 2 counterpart. 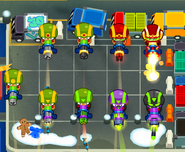 0-2-2 Powerful Darts shooting at a MOAB 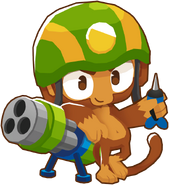 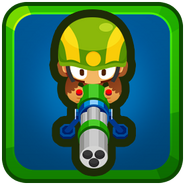