Powerful Darts is the first upgrade in path 2 for Dartling Gun in BTD5, which allows the Dartling Gun's darts pop 3 bloons each at greater projectile speed. It costs $510 on Easy, $600 on Medium, $650 on Hard, and $720 on Impoppable. The Dartling Gun is much more powerful with it. This upgrade also gives a slight dart rate increase for the Dartling Gun, just like the Missile Launcher upgrade on the Bomb Tower. 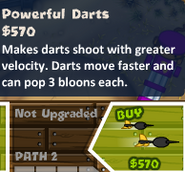 A Dartling Gun with this upgrade in Ice Flow

Powerful Darts BTD5 Icon
Add a photo to this gallery

Retrieved from "https://bloons.fandom.com/wiki/Powerful_Darts_(BTD5)?oldid=271659"
Community content is available under CC-BY-SA unless otherwise noted.