Bloons Wiki
Register
Don't have an account?
Sign In
Advertisement
in: Articles in construction with a WIP, Articles that need more images, Druid,
and 6 more

Poplust is the fourth upgrade of Path 3 for the Druid in Bloons TD 6. It provides a 15% attack speed and pierce buff to all other Druids in its radius, stacking up to 5 times additively (for a total of 75% increased attack speed and pierce). Poplust also stacks multiplicatively with Heart of Vengeance and Druid of Wrath, up to a maximum bonus of 7x.

On the upgrade portrait, the Poplust clearly expresses intense wrath. The monkey's pupils glow red and yellow, as do its eyelids. Both hands are glowing red and forcing out dark grey thorns. The monkey also appears to experience recoil from the intense wrath.

A group of 6 or more (since they cannot buff themselves) Poplust Druids with Thorn Swarm can dish out a lot of damage in combination with previous upgrades, and are especially proficient at thinning out tight Bloon rushes. When deployed with a level 18 Obyn Greenfoot, all Druids of Wrath begin the round with 200 pops which effectively doubles their base attack speed. This is further improved with Obyn's boosts to Druids at level 2 and Magic Monkeys at level 11; increasing their range and pierce. All the Druids can also be boosted by Alchemist's Berserker Brew and Stronger Stimulant with increased attack speed, range, pierce and damage; with eight thorns each dealing more than two layers of damage, the tower is able to dish out a significant amount of damage quickly and consistently.

Alternatively, the player may opt to crosspath with the top path. Heart of Thunder is affected by the attack speed buffs, providing incredible popping power but less layer damage potential. 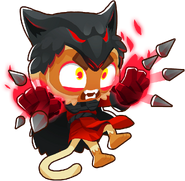