Bloons Wiki
Register
Don't have an account?
Sign In
Advertisement
in: Articles in construction with a WIP, Mortar Monkey, Bloons TD 6,
and 8 more

For the BTD5 ability of the same name, see Artillery Battery (BTD5).

Pop and Awe is the final upgrade of Path 2 for the Mortar Monkey in BTD6. It exchanges the Bombardment ability with a new ability, Pop and Awe. Activating this ability will stun bloons and blimps, excluding BADs, at 1-second intervals 8 times during approximately 8 seconds, with bloons only moving for very short time in between. During the ability, all bloons onscreen are damaged at a rate of 20 damage per second, but the Bombardment ability's benefits will be absent. Cooldown for the ability is 60 seconds, and always goes under initial cooldown before initial activation.

Pop and Awe has a commander look to it, with a monkey saluting as the mortar shells get shot. The three mortars are now displayed in a line instead of a triangle position. The two lines on the mortars also look a lot bigger and slightly brighter compared to the Artillery Battery. The monkey does not have many changes, however, as only his hat is now white and the super thin yellow rim on the Artillery Battery's sleeves is gone.

Pop and Awe is a moderately strong tower overall, with both greatly increased Heavy Shells damage bonuses and the ability to stun all bloons on screen. With various buffs from Version 17.0 and 22.0, it has become a viable option for Two Megapop Challenge (where one tower pops almost all bloons) in CHIMPS mode even on shorter maps. Despite having a solid main attack damage, Striker Jones helps with Pop and Awe's major weaknesses, most particularly the long ability cooldown and the small blast size of its main attack. Striker Jones' stun ability also activates the increased damage on the main attack for stunned bloons (from +2 damage to +10 damage), making this an incredible combo.

Due to its price and cooldown, there may be better options for slowing bloons if you're not intentionally building around this tower. While not able to completely stun bloons, MOAB Glue and Bloon Sabotage are cheaper than Pop and Awe while providing similar slowing powers. Furthermore, multiple MOAB Glues and Bloon Sabotages can be placed for greater effectiveness than an 8 second stun. Icicle Impale also offers more consistent damage at the expense of a shorter range for the slowdown, although still at a high pierce value of 30.

In spite of its low stun ability uptime, Pop and Awe is significantly more reliable at tackling Super Ceramics in the presence of good Super Ceramic stuns such as Shell Shock, Bloon Impact, or Flash Bomb, as just one stun triggers massively increased damage to stunned bloons, wiping out any stunned Super Ceramics in just a few seconds.

Pop and Awe's damage output has been buffed in various updates. Firstly, the ability now deals a lot more damage compared to the original ability. Alongside more synergy with stun effects in Version 17.0, its main explosions has also gained substantially more Heavy Shells bonus damage on Version 22.0 to distinguish itself as a powerful Tier 5 upgrade.

When activating Pop and Awe Ability: 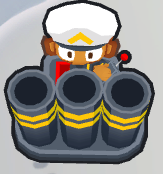 Versus Camos, DDTs, and BADs

Pop and Awe description as of Version 17.0 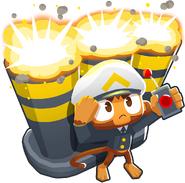 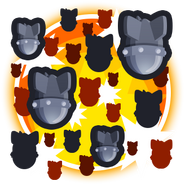 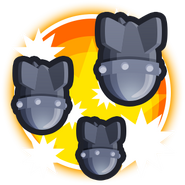 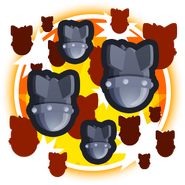 New Pop and Awe ability icon as of Version 27.0

Instamonkey for Pop and Awe