The Pontoon is a deployable object that makes an appearance in Bloons TD 5 and Bloons TD 6. It is depicted as a few wooden logs floating on an inner tube. When placed in the water, land towers can be placed atop the Pontoon. Although it has a pop count, the Pontoon has no attacks. The Portable Lake is the opposite of the Pontoon, allowing water towers to be placed on land.

40, making it one of the cheapest Special Agents, alongside the Monkey Farmer and Portable Lake.

In Bloons TD 6, the Pontoon is available as a Power and costs

50. In this game, selling a Pontoon or Portable Lake will also sell the towers on top of them. An "Iceberg Pontoon" skin was released in the 22.0, and costs 35 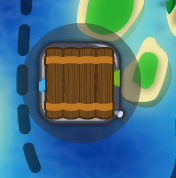 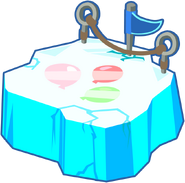