Plasma Vision is the 2nd upgrade of Path 1 for the Super Monkey in BTD5. It makes the Super Monkey shoot plasma balls instead of lasers that can pop any type of bloon, as well as increasing the number of bloons it can pop. This upgrade returns in BTD6 as Plasma Blasts. 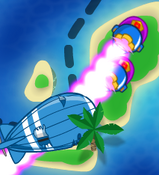 A Super Monkey attacking with Plasma Vision in BTD3.

Plasma Monkey's beams moving as the tower itself moves. In effect, this happens.

The Plasma Vision/Blasts as seen in BTD5 Steam