Bloons Wiki
Register
Don't have an account?
Sign In
Advertisement
in: Articles in construction with a WIP, Dart Monkey, Bloons TD 6,
and 7 more

Plasma Monkey Fan Club is the Tier 5 upgrade of Path 2 for the Dart Monkey in Bloons TD 6. Its special ability transforms up to 20 of the nearest Dart Monkeys into rapidly firing Plasma Blast Super Monkeys for 15 seconds with a cooldown of 50 seconds. During the ability, transformed Dart Monkeys have 40 range and attack every 0.03 seconds with a 2 damage and 5 pierce plasma blast projectile that travels less compared to true Plasma Blasts. The base tower retains the same attack statistics as the Super Monkey Fan Club. Transformed Dart Monkeys will inherit most crosspaths and buffs.

Plasma Monkey Fan Club massively improves the Fan Club ability, allowing it to transform up to 20 non-Crossbow, non-Spike-o-pult Dart Monkeys, including itself, and granting those Dart Monkeys the following stats for 15 seconds:

The Plasma Monkey Fan Club leader will transform the 20 nearest Dart Monkeys into mini-plasma Super Monkeys according to the following rules.

The Long Range Darts upgrade has no effect on the transformed dart monkeys. All other crosspaths provide some sort of buff to the dart monkeys in their transformed state. Enhanced Eyesight increases range, grants camo detection and Camo Prioritization, and increases projectile lifespan, Sharp Shots and Razor Sharp Shots increase pierce, and path 2 upgrades increase rate of fire and damage.

The Plasma Monkey Fan Club and its Plasma Dart Monkeys follow all standard tower interactions and inherit all applicable buffs with a few noteworthy points.

The Plasma Monkey Fan Club ability converts 20 dart monkeys into Plasma Super Monkeys that can rapidly deal intense damage to bloons across the map. In conjunction with easily obtainable buffs, the Plasma Monkey Fan Club excels in many categories such as single-target damage, grouped-bloon damage, and map-wide coverage. Conversely, the Plasma Monkey Fan Club proves difficult for even experienced players to utilize as there are several weaknesses to consider. The incredibly high cost of the upgrade makes it difficult to obtain mid-game unless farming is used. Even if afforded, placing all the dart monkeys and supplying buffs can be a cumbersome and space-inefficient task. Additionally, the short ability uptime and weak attack power of the base tower can leave defenses vulnerable when the ability is inactive. However by taking measures to cover these weaknesses, the Plasma Monkey Fan Club can be extremely useful in Boss Events, Multi-lane maps, C.H.I.M.P.S., and Freeplay where its intense bursts of concentrated damage can clear even the largest bloons within seconds.

For general late game and freeplay usage, the Plasma Monkey Fan Club and transforms should be placed in centrally located regions of the track to increase time spent damaging bloons. With decent farming, money is usually not an issue at this point. So, priority should be given on saturating the Tier-5 tower, as well as its transforms, with the proper upgrades and buffs. In terms of crosspath, use path 2 dart monkeys (either 0-4-2 or 2-4-0 Super Monkey Fan Clubs) for the transforms as this will maximize rate of fire and damage. The choice between the 0-4-2 and 2-4-0 is a matter of personal preference as the first provides extended range, and the second offers higher pierce, both of which are comparably useful. For buffs, use Permanent Brew, Primary Expertise, and Energizer to easily buff the transforms and reduce ability cooldowns. Additional buffs include a True Sun God/Vengeful True Sun God, Support Sun Temple, Ultraboost or Overclock and Hero buffs like Ezili's Totem. All of these will enhance the attack power of the transformed monkeys and, in combination, the resulting damage output can outclass that of even a maxed Apex Plasma Master.

For Boss Events, the main goal is prioritizing single target damage. So, the late-game strategies mentioned above will be effective. If money becomes an issue, prioritize the Permanent brew, Primary Expertise, and Energizer buffs above all else. Also, it may be worth forgoing buffs and simply using the Plasma Monkey Fan Club (alongside its transforms) as a stepping stone for a high degree Apex Plasma Master, as the Apex Plasma Master is more optimized to these events. In this case, allow the Plasma Monkey Fan Club to accumulate pops for degree benefits.

In income-restrictive game modes like C.H.I.M.P.S., using the Plasma Monkey Fan Club entails saving up a large sum of money with a relatively cheap defense. Towers like the Sun Avatar and Berserker Brew are able to reliably carry mid-game rounds and also cover ability downtime during late-game. An alternative option is Primary Expertise which can defend bloons with its ballista attack, providing free upgrades that helps even more with saving money and midgame, and it reduces ability cooldowns which improves uptime of the ability. In addition, try to delay the round ending as much as possible using ice towers, Downdraft Heli-Pilots and other stalling towers. This gives the ability time to recharge. Even though many other buffs are unaffordable in this game mode, the Plasma Monkey Fan Club can trivialize the heavy MOAB rushes of rounds 90+ if used correctly.

Plasma Monkey Fan Club's interaction with Total Transformation was patched out because it was considered too "powerful" by Ninja Kiwi. It was initially not patched by NK because they stated that it still required considerable long cooldown to combine the abilities together.

On another note, it did receive a balance change later on that made its transformation stronger for a fewer number of Dart Monkeys. While considered underrated in power among certain high-skilled players, Version 26.0 buffed Plasma Monkey Fan Club yet again due to the hefty price of a PMFC setup compared to a Total Transformation setup. 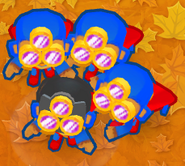 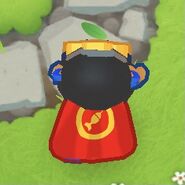 Plasma Monkey Fan Club Backside while the Ability is Active 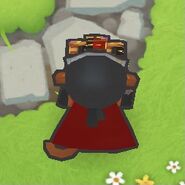 Plasma Monkey Fan Club Backside while the Ability is Inactive 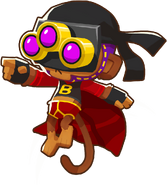 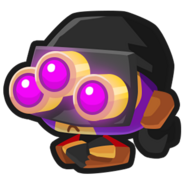