Plasma Blasts dramatically increases the overall performance of the Super Monkey with its double attack speed. It is capable of dealing overall large damage versus bloons and MOABs. It is undeniably the most favorable crosspath choice for Super Monkey upgrades along Upper Path 2 (Robo Monkey and above) and Upper Path 3 (Dark Knight and above), unless for camo detection (Upper Path 2) or extra Darkshift range for Dark Knight (note that Dark Champion already has infinite Darkshift range).

In order to balance out power between Path 1 crosspathing over Path 2 crosspathing, the Plasma Blasts' pierce was reduced, while also reducing the cost of this upgrade to compensate. It still retains the unique double attack speed that it now gains in BTD6. 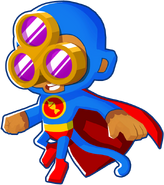 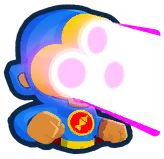