Plasma Accelerator (sometimes shortened to Paccel or Accel) is the fourth upgrade of Path 1 for the Dartling Gunner in Bloons TD 6. Instead of launching individual projectiles, it now fires a concentrated beam of plasma energy at wherever the cursor is located or the player last tapped. Bloons that cross the beam itself take damage, while the endpoint of the beam deals extra damage to Bloons. The endpoint pierces more if the whole laserbeam has remaining pierce. Plasma Accelerator gains the plasma damage type, so it can now pop Lead Bloons, but still does not pop Purple Bloons. Plasma beam is a laserbeam 2 units wide, focal point is a radial AoE of 4 units radius, the dimensions increased by +50% with 4-0-2.

The laser beam itself deals 1 damage every 0.20s contact and up to 50 pierce (75 pierce with 4-0-2). At the end point of the beam, it deals 2 damage every 0.20s contact, +10 versus MOAB-class. Any leftover pierce is used to activate the endpoint damage instead of laserbeam damage. The endpoint will only activate if the laserbeam has not reached its pierce limit or not hit any Purple Bloons. An active endpoint is indicated by visible bubbling yellow plasma at the very end of the beam. The endpoint extends to the maximum distance that the beam can travel, and thus the beam will only go as far as the Dartling is aiming.

Plasma Accelerator's appearance changes significantly compared to the previous upgrade, doing away with the laser emitter for a golden plasma launcher with a red point, various red lights, and a red tube linking to the rear of the gun.

The monkey now wears an all-red full body suit, retaining the green visor, with gold bands around its wrists and ankles, expanding the emblem on its forehead to have wings, and adding golden circles on either side.

Crosspathing with path 2 turns most of the launcher purple, then the remaining golden parts green.

Crosspathing with path 3 shortens the launcher, mounts it on a tripod with two silver bands, before painting those bands blue and adding gold stripes along the sides of the monkey's head.

Plasma Accelerator converts the tower to firing a laserbeam that deals contact damage every 0.2 seconds and ends in a point that deals extra damage; the main beam's damage remains at 1, with 50 pierce, while the point deals 2 damage, 10 to MOABs, and uses any pierce not consumed by the beam. The beam itself is also plasma type, popping any Bloon type save Purple Bloons.

The endpoint does not appear if the Plasma Accelerator caps its beam's pierce or the beam contacts a Purple Bloon.

Both the beam and the endpoint are able to apply an improved Laser Shock, lasting 5 seconds and granting +1 damage to Plasma Accelerators and higher.

Powerful Darts grants Plasma Accelerator +25 pierce rather than +2; it also increases beam width from 2 to 3 and end point size from 4 to 6.

With the Cross the Streams MK, having two Plasma Accelerators' beams intersect generates a plasma pool every 1 second where the beams cross; these pools deal 1 damage to up to 5 Bloons and apply Laser Shock for 2 seconds.

Plasma Accelerator customly aims based on direction and angle of where the Dartling points towards. It continously produces a laserbeam controlled in a aim-based mobile style guided by touch-based mobility. The laserbeam consists of a rectangular contact area with a radial area of effect at the endpoint.

Plasma Accelerator is a relatively powerful tower for its cost. As the main source of damage is now concentrated in a small area, considerable micro is required to use this tower at its full potential. However, the tower becomes less effective during Freeplay Rounds when Super Ceramics start to appear, mostly acting as a supportive blimp damage dealer on those rounds. Paccel tends to struggle at beating Super Ceramics, so it is recommended to get other towers that can deal with them and stronger blimps.

Not including the bug where the beam dealt +10 MOAB-class bonus damage, Plasma Accelerator got buffed overall. In a few updates, its beam now applies Laser Shock and the Plasma Accelerator attack has gained an increased attack rate. 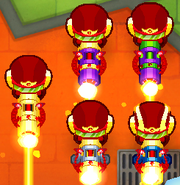 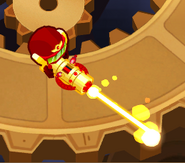 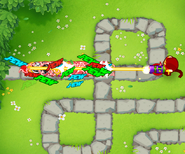 Plasma Accelerator versus Super Ceramics along a straight line 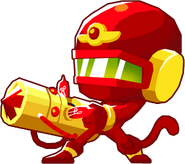 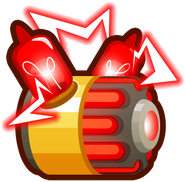 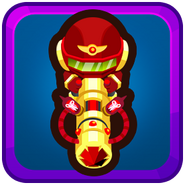