In Bloons TD games, the Pink Bloon is a dangerous early-game bloon, and even more threatening than the already fast Yellow Bloon. In fact, it's the fastest bloon in the game, alongside the invulnerable BTD6 Golden Bloon and BMC DDT.

When first introduced in BTD4, the Pink Bloon was the fastest in the entire series. It moves 3.5 times faster than the Red Bloon. It has the same speed as the Dark Dirigible Titan in Bloons Monkey City, as well as its variants. However, when Bloons Super Monkey 2 was released, all of these were surpassed with the Golden Bloon. Pink Bloons are still the fastest bloon in the BTD series.

The following are all appearances on each round where Pink Bloons will spawn naturally from the entrance. These will not include the rounds where the Pink's parents or subsequent parents will feature.

Pink Bloons' main offense comes from their speed. They are, as mentioned, the fastest Bloon in BTD series, with a speed of about 3.66 inches per second. Their speed can though be dropped down to that of a Red or Blue Bloon with Monkey Glue or a Glue Gunner. Permafrost or Arctic Wind from the Ice Tower is an alternative strategy. However, spaced Pinks in the early rounds can prove themselves to be quite annoying because of the fact that many towers, from Bomb Towers (less if the tower is an X/2 or more) to even Super Monkeys, may miss them. Also, in the early rounds, the players typically don't have a solid defense, or they are farming, which directs less money towards defenses. You need a fast tower to pop them, as a Pink Bloon can outspeed a Super Monkey, Destroyer, or TOTMGS, in BTD5 or even a Sun God in BTD4.

In BTD5, grouped Pinks are far less of a threat than spaced Pinks, as there is no space between them for towers to miss. Additionally, higher-ranked bloons like Blacks, Whites, Zebras and Leads, which contain Pinks, start to appear later on. This means that having fast-attacking towers is almost required, to pop all the Bloons completely and quickly before the Pinks inside get too far; especially on short, difficult tracks, like Bloontonium Lab, Clock and Down the Drain.

Sniper Monkeys are good to pick off early Pinks, as they hardly ever miss Bloons no matter how fast they are moving. Ninja Monkeys and other towers with homing bullets, such as Monkey Subs, will also never miss the Pink Bloon (however, these might not be powerful enough to pop it, depending on upgrades). For instance, if a bunch of random towers pop many Black Bloons, it releases many Pink Bloons. But if several Sniper Monkeys perform some good shots, they can strip them down to Yellow Bloons and below, effectively "skipping" the pink layer, and being beneficial to other towers. However, the upgrades Bloonjitsu, The Big One, Bloon Liquefier and Point Five Oh are able to pop an entire Pink Bloon (Point Five Oh can pop even a Zebra/Lead Bloon instantly) at once.

Monkey Apprentices with the Lightning Bolt upgrade and Spike Factories are useful to pop Pink Bloons. In the latter case, each stack of road spikes pops at least one entire Pink Bloon in a go.

The Pink Bloon in BTD5.

The Pink Bloon in BTD4. 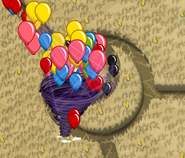 A tornado blowing away some Pink Bloons and parents and children.

Pink Bloon in the Monkey Lane.

Pink Bloons can be slowed down by Glue Gunners

A Pink Bloon outrunning a Technological Terror, something that not even the Yellow Bloon can do.