Pin is the 2nd upgrade of Path 3 for the Engineer Monkey in Bloons TD 6. It allows the Engineer to pin down all affected non-MOAB-class bloons for 1.0s, similar to a stun. Pinned bloons are temporarily immobilized, and the status effect pins up to one layer, although an Engineer with this upgrade repeatedly attacking the same bloon will simply refresh the effect. Regardless of further upgrades or external buffs, this status effect cannot stop Lead or Ceramic Bloons, as these bloon types are unaffected by it.

Sentries with at least Sprockets will be able to inherit properties of the Pin effect. Cleansing Foam with Pin will briefly slow down all non-blimp Bloon types by 50%.

Engineers with Pin sport an all-black cap, a bulkier nail gun with a significantly thicker gray barrel, and a pair of orange work gloves with a black back.

The nail gun and gloves remain on all crosspaths; the cap does not.

Pin is a valuable upgrade for early-game stalling. Combined with the Oversize Nails' pierce bonus, it makes the Engineer become quite strong along straightaways. It also is pretty cheap, making it a very good option for the early game.

There is a very small buff specific to the Pin upgrade that affects crosspathing benefits.

Pinned Bloons stopped by a 0-1-2 Engineer

Close view of a pinned bloon stopped by a Pin Engineer 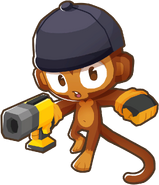