The Phase Crystal is a Special tile in Bloons Monkey City. Players must defend against 26 rounds of double-speed Bloons. The crystals in the middle has an ability identical to the Technological Terror's Bloon Annihilation (even the glitch that prevents it from popping camos), except with a cooldown of only 15 seconds (57 seconds on mobile). This tile is required for the Crystal Fusion Array special building to research the Ray of Doom for the Dartling Gun. Completing this tile earns 1500 XP, at least

The Phase Crystal ability, which has a fairly short cooldown in comparison to most other ability cooldowns, will completely annihilate all bloons in a short radius of the Phase Crystal (basically a couple tower widths down each path, towards the edges of the screen) up to and including BFBs (which is the highest level bloon during the battle). Judicious use of the Phase Crystal ability is perhaps the single greatest factor for ensuring success. It is capable of taking out most mid-level leads, and many of the later MOAB classes, including (importantly) all of the BFBs. There are at least two deployed bloon schemes, one with MOABs earlier and more often, the other more focused on regular bloon rushes. If you get your first MOAB at round 16 you should gear future towers towards MOAB disabling/damaging, otherwise for dealing with bloon rushes. Again, as most MOABs can be dealt with with the Phase Crystal ability, a tendency towards preparing for rushes is probably a safer bet, all things being equal.

Bloons will come out of only 4 of the 8 entrances/exits:

Consequently (as utilized in the next strategy) initial tower placement should generally ignore the bottom left corner.

A very effective starting strategy: 3 ninjas - 1 in each corner except bottom left. Get them all up to 1/1 then 3/1. Phase Crystal any leads or big rushes (First big rush comes at level 8 and first leads at level 9). Pineapple if needed. If you lose due to leads, retry and get a 2/1 glue next to each entrance, set to Close. If ceramics kill you, be ready to phase them or get distraction, possibly Bloonjitsu. Once you have 3 Bloonjitsus, spam them till you win. Phase any MOABs or BFBs. Alternatively, one 4-2 bloonchipper in the top left corner and a 3-2 bloonchipper in the top right eliminates the reliance on the phase crystal to clear most MOABs and BFBs and ceramics. With a few bloonchippers in essential spots instead of some of the extra bloonjitsus, the phase crystal becomes a backup instead of a crutch.

Strategy by Qwertyxp2000 the second[]

I based my strategy upon the strategy by anonymous. I started with $3450 starting cash. I put 3 ninjas one in each corner, excepting the bottom-left. You may use any free Dart Monkeys given, where you can put them anywhere around the Phase Crystal. Upgraded all to 1/1, except the top-left one, which has Sharp Shurikens (if you have a smaller budget, upgrade all to 0/1). I upgraded the ninjas to Sharp Shurikens and then Distraction. Added a 2/1 Glue Gunner at the right and left of the Phase Crystal to pop nasty leads. Random Guy's Tip: (After that, just continue upgrading your ninjas to bloonjitsus and if you have about 3 in the top left and 2 in the other corners, make sure you get your glue'ers 3/2 after that. (This is because some of the other bloons will get through because the leads block the ninjas shurikens from popping them.) )

Strategy by Bloons2 (For mobile)[]

I based my strategy on Qwertyxp and Anonymus. I had $2700 starting cash and 135 lives. I put 3 dart monkeys in each corner except bottom-left. Upgrade all to 1/3 (except the top left which has 2/3). Upgrade dart monkeys to 2/3. Then, I got a 1/2 sniper to pop leads. Get another 1/2 sniper to deal with groups of leads. When you have enough money, start selling your dart monkeys and replace them with 1/1 Ninjas. Upgrade them to 3/2 and then 4/2. I had 2 4/2 ninjas on the top left corner, one on top right and top left. Start getting some 2/3 Bomb shooters on the top of the phase crystal to deal with MOABs. Since the Phase crystal has a 57 second cooldown on Mobile instead of 15 on flash, the phase crystal is not a reliable defense against MOABs or BFBs. Phase the first 2 MOABs that come around Round 16-18 but wait for both to be within the range of the phase crystal. Also phase the regen rainbow rush of doom that comes in mid-game. Phase all BFBs (I only had 3 in my game) Once you have 5 bloonjitsus with distraction (2 in top left, 1 in top right, 1 in bottom right and 1 in bottom left), buy a 2/3 heli to blow away any ceramics from MOABS or BFBs. Set the heli to pursuit mode. I had 22 lives lost but no continues, monkey boosts or road items.

This is an interesting strategy that does not use the phase crystal as much. I started with a spike factory on the bottom left corner, inside of the square slot at the top so it would hit all 4 paths. I also got a boomerang right next to it and a ninja above the spike factory as well. I started the rounds and was on auto start mostly, upgrading the ninja to 3/2 and the boomerang to 2/3. I got another spike factory but at this point leads become a problem, so getting 2 corrosive glue gunners could help as well as good timing with the phase crystal. I got the ninja up to 4/2 and got another ninja which I got up to 2/3 for camo leads. I upgraded the spike factories up to 2/2 and commenced the process of spamming 4/2 ninjas. I used the phase crystal if there were too many M.O.A.B's, however moab maulers would do a pretty good job. That would be a good base and should be able to carry you through the mission. Feel free to place other towers or just use farms for cash if you feel the income is too low. Losing lives is fine, this is a hard mission. 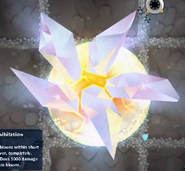 Bloons moving around the Phase Crystal 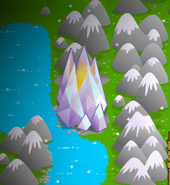 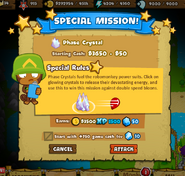