Bloons Wiki
Register
Don't have an account?
Sign In
Advertisement
in: Articles in construction with a WIP, Articles that need more images, Alchemist,
and 7 more

Permanent Brew is the final upgrade of Path 1 for the Alchemist. It enhances the duration of all of its buff potions, the Stronger Stimulant potion and Acidic Mixture Dip potion, to last indefinitely instead of the original usage duration of 40 and 10 shots per applied potion respectively, provided that the Permanent Brew Alchemist is not sold or sacrificed.

The buffs are given separately from each other. The exact buffs given are +1 damage, +3 pierce, +17.6% attack speed (x0.85 attack cooldown), +15% range from the Stronger Stimulant buff, and +1 damage to Ceramic and MOAB-class bloons plus granting lead-popping power from Acidic Mixture Dip.

An Alchemist with Permanent Brew has a much more crazy appearance. He gains a full beard and a moustache, and wavy head hair, all colored red. On his back, the Permanent Brew Alchemist carries two huge kegs of brew and a large back fuming tank. He also carries two wooden root beer mugs on his hands. He is also fully clothed with a full orange suit underneath his orange cloak. His pupils are dilated concave downwards.

Alchemists with this upgrade can throw buff potions at nearby towers, giving them tower buffs. Acidic Mixture Dip is thrown on a random tower and prioritizes those without an AMD buff. Permanent Brew potions always target on Close relative to the Alchemist, and ignores already brewed targets or those who have very recently been brewed.

While most strategies will settle for a lower tier Alchemist or other cheaper buff, Permanent Brew provides an extremely strong buff but at an extreme cost. In CHIMPS, this means that it tends be difficult to afford, but usable if planned out with an extremely greedy strategy. Outside of CHIMPS, it is much more accessible and good to add to your defense if you have a tower that receives buffs well, as its damage buff is unique and comes with pierce and attack speed buffs and can come in useful.

The competition versus Stronger Stimulant's extreme cost-efficiency in the most early versions of BTD6 had made Permanent Brew highly outclassed. However, with several buffs to this upgrade and nerfs to Stronger Stimulant, Permanent Brew has made its way as a viable CHIMPS support tower in combination with large groups of extremely fast-attacking towers, or just fast-attacking towers in general.

Starting from Stronger Stimulant, which includes Permanent Brew, the Alchemist now plays sounds as it buffs other towers.

When brewing a nearby tower: 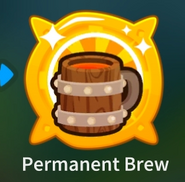 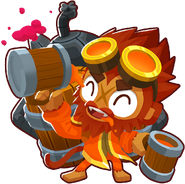 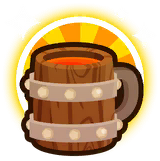