Permafrost is the Tier 1 upgrade of Path 1 for the Ice Monkey in Bloons TD 6. Like previous versions of Permafrost, frozen bloons move 50% slower (Absolute Zero with 75% slower) after unfreezing, but this only lasts for one layer (2 with Deep Freeze, 4 with Absolute Zero). When crosspathed with any Tier 5 upgrade, including upgrading to Super Brittle, the Permafrost applies to blimps upon damaging, but with only a 25% slowdown instead of 50%. If crosspathed with Snowstorm or Absolute Zero, ability also applies for Permafrost effect. However, only Absolute Zero ability can apply for MOAB-Class Bloons slowdown effect.

This upgrade adds a light blue snowflake symbol on top of the monkey's head. The portrait for Permafrost depicts the Ice Monkey blowing cold air.

Permafrost produces freezing blasts in a zone-like style. Technically, the Ice Monkey is locked on the Close targeting priority. However, for simplicity reasons, this monkey has no targeting priorities.

Permafrost is a cheap but somewhat unreliable way of slowing down bloons. As long as bloons pass by and are not hit by other towers, the Permafrost slowdown effect will last forever. This upgrade sees the most use in its effectiveness at slowing down Ceramics, especially Super Ceramics. When given to higher-tier Ice Monkeys, the Permafrost effect on MOAB-class bloons in effect clumps them up, slowing each affected blimp down permanently when hit. 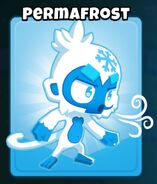 Permafrost as shown in the tower upgrade menu 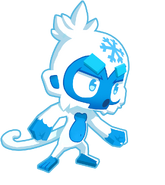