Additionally, there is a special interaction with Red Hot Rangs. It grants +4 damage instead of +1 and increases the ability's bonus damage from +8 to +10, for a total of 8 damage per boomerang without the ability and 18 damage while the ability is active.

Perma Charge turns the yellow stripes on its head into rows of green lights, adds a crest at the top of its head, colors the stripe down its chest blue-gray, as well as adding two similarly colored stripes on its off hand.

The boomerang launcher now gains an additional green chevron, and a green tube connecting to the monkey itself; it also glows magenta while the ability is active.

The boomerangs it launches are now black with green stripes, and turn into glaives when given the upgrade of the same name.

Perma Charge, true to its name, permanently gains the stats of Turbo Charge, most notably the attack speed and bonus damage, while adding an additional +2 base damage on top of the increased damage, for a total of 4, 6 vs MOABs.

Its ability is also changed, granting a flat +8 damage for 15 seconds, with a cooldown of 40 seconds and initial cooldown of 10 seconds.

Red Hot Rangs has several unique interactions with this tower: it improves the base damage of the boomerangs by 4 instead of 1 (for 8 total, 10 to MOABs) and causes the ability to deal +10 damage rather than +8, (for 18 total, 20 to MOABs) along with its standard benefit of granting Normal type, allowing this tower to pop any bloon type.

Like all Boomerang Monkeys, Perma Charge can access Change Hands secondary targeting priority to switch hands, changing the origin and direction of the boomerangs.

The following is a list of statistics of a Boomerang Monkey with Perma Charge. It includes its base statistics and all associated crosspathing interactions. Expand the box on the right to see further information.

The following are a list of wiki-written damage types associated by a Boomerang Monkey with Perma Charge. These damage type statistics include how it attacks and how these attacks would affect bloons. Expand the box on the right to see further information.

Perma Charge is one of the most well-rounded towers in the game. It offers a high amount of DPS while being at a great price-point. It is also extremely versatile, still demolishing dense and DDT rounds alike without needing a specific hero or buff (except possibly Monkey Village). As such, it features as a prominent DPS tower in many strategies.

Perma Charge has been buffed significantly since it was first released. Alongside more bonus damage with its new ability, inherited buffs from Turbo Charge, and some extra damage to its main attack, Perma Charge has become a solid late-game option at performing high DPS. In addition, it is among the earliest Tier 5 upgrades to have been directly buffed with a special interaction with its generally weaker crosspath choice (in this case, the 0-5-2 crosspath with even more base damage). 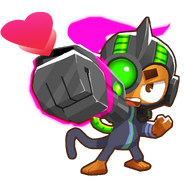 Permacharge ability with no crosspaths 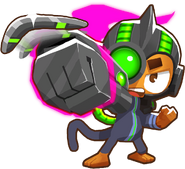 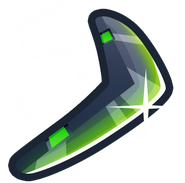