Perma-Spike (sometimes referred to as Permaspike) is the final upgrade of Path 3 for the Spike Factory in Bloons TD 6. Although it produces spike piles at a significantly slower rate (from every 1.75s to every 4.85s, excluding Path 2 crosspaths), it produces much more powerful spike piles that pop up to 50 bloons per pile (90 bloons with Bigger Stacks) and deal 10 damage per spike for a maximum of 500 damage per spike pile (900 with Bigger Stacks), making it extremely powerful for stockpiling spikes. Despite the name, but in accordance with the upgrade's description, the spikes are not actually permanent. The spikes last between rounds and have a longevity of 4 rounds each or 300 seconds, whichever comes first.

Perma-Spike is a much larger tower than its predecessor, with a primarily yellow color scheme, particularly for its four supports and connecting ring surrounding a grey main body; it also retains the four gears of Deadly Spikes.

The spike piles themselves are now a short yellow base bearing four vertical spikes and a spike on each corner; the base now also bears a few rivets.

Perma-Spike greatly improves the damage and pierce all its spike piles, dealing 10 damage per spike and having 50 spikes per spike pile (or 90 with Bigger Stacks). However, spike piles are produced much slower, down to 4.85s without Path 2 benefits. Spike piles become larger and can now carries over up to three rounds instead of two, and last for 300 seconds, lasting up to 4 rounds or 300 seconds, whichever comes first. The spike carryover benefit has no effect on Apopalypse, but has effect on Boss Bloon Events. Perma-Spike also has the benefits of Smart Spikes.

Perma-Spike defaults on Normal targeting priority, which dispenses the spikes onto nearby bloon track in a semi-sporadical behavior. Because it already has Smart Spikes, it will also receive Close, Far, and Smart.

Perma-Spike is exceptionally powerful when very careful spending and stalling techniques are implemented, due to the nature of this tower. Spikes last extremely long, making optimization of stockpiling techniques a major necessity for maximizing the true power of Perma-Spike. The role of Perma-Spike mainly comes into play during the late-game to tank a substantial amount of bloons, working very well on almost all maps.

Perma-Spike relies heavily on stockpiling its spikes effectively through various means of stalling.

For greater in-depth information about optimization of Perma-Spike and its synergies, refer to Perma-Spike/Strategies.

Overall, Perma-Spike has been nerfed heavily overall since it was first released. Initially, it was considered one of the most overpowered upgrades in the game due to the 0-2-5 Perma-Spike's capability to solo until around the early 90's when given sufficient lead-popping support, all for a very low cost. Its power was reduced drastically in Version 2.0, but remained a useful upgrade for tanking various types of bloons in the late-game. Throughout later updates, it got a few nerfs but gained a few quality-of-life buffs for Perma-Spike itself, plus steady pierce buffs for the weaker 2-0-5 crosspath. 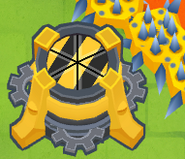 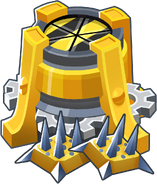 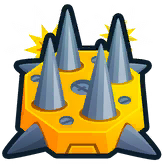