Bloons Wiki
Register
Don't have an account?
Sign In
Advertisement
in: Articles in construction, Paragons, BTD6 Upgrades,
and 2 more

Paragons or 5-5-5 Towers (Tier 6 Upgrades prior to update 28.0) are the ultimate tower upgrades that were introduced to Bloons TD 6 in update 27.0 on 25th July 2021. Paragons are created by placing one of each of the three Tier 5 Upgrades of a desired tower and upgrading any of the tier-5 towers. Doing so will merge all three tier-5 towers, along with any lower tier towers of that type into the Paragon: a powerful tower that deals enormous damage to all bloon types (including camo), with bonus damage to

The strength or "degree" of the Paragon ranges from 1-100 and is determined by the "number and effectiveness" of the merged/sacrificed towers.[1] This is calculated using the total cost, pop count, income generation, upgrades, and number of monkeys sacrificed as explained here. Paragons are also unaffected by most tower interactions, like buffs and discounts.

In addition, only one paragon of a specific tower may exist at a time (including in co-op), but the sacrificial Tier 5 towers may be rebought after creating the Paragon.

Towers can only be upgraded to Paragons in normal game modes and Challenge Editor. Like the Vengeful True Sun God, Paragons cannot be obtained in Sandbox Mode, but unlike the VTSG, they can be obtained in C.H.I.M.P.S.

As of Version 29.0, there are 4 Towers with Paragon upgrades in the game. The other tower Paragons are slated for future updates.

Paragons merge visual elements from each of the three contributing tier-5 towers while still retaining a look largely independent from any of the sacrificial towers. In addition, the name of the Paragon usually derives from some combination of the constituent tier-5 towers, though not necessarily. Paragons appear larger in size compared to the base tower (but the footprint is unchanged) and gain more powerful adornments every 20 degrees, with cybernetic enhancements, decorative markings, spikes, and more being added.

A base Paragon can be created by having one of each tier 5 tower for a specific monkey on screen, at which point, the upgrade icon for the Paragon will become available on any of the tier 5 towers. Purchasing the upgrade will change the selected tower into the Paragon, while sacrificing every other tower on screen (including those belonging to co-op players). Only one Paragon of a specific tower may exist at a time, even in co-op.

In addition to cosmetic changes every 20 degrees, increasing degrees will elevate the damage output of the Paragon. The degree is entirely determined by a hidden value known as "power", which itself is dependent on total pop count and cash generated, tier 5 upgrades, non-tier 5 upgrades, cost, and number of sacrificed towers as follows:

As a result, there is no unique set of upgrades, prices, etc. that will place the Paragon at a certain degree, only the total power matters. The power needed for each degree is determined by the formula:

Regular Damage: The regular damage of each attack for all Paragons scales with Degree according to the equation:

Where "D" is degree and d0 is the Damage of that attack at Degree 1. This can be found on each individual Paragon's page.

Ceramic Damage: The Bonus Damage to Ceramics scales with degree according to the equation below. Add it to the Regular Damage to calculate Total Ceramic damage. Many attacks have 0 bonus Ceramic Damage.

Where "D" is degree and cd0 is the Bonus Ceramic Damage of that attack at Degree 1. This can be found on each individual Paragon's page

Where "D" is degree, bd0 is the boss bloon bonus damage at Degree 1, and dD and mdD are the Regular Damage and MOAB Damage for each degree as outlined above.

Where "D" is degree, bd0 is the boss bloon bonus damage at Degree 1, and dD and mdD are the Regular Damage and MOAB Damage for each degree as outlined above.

Elite Boss Bloon Damage: Total damage done to Elite Boss Bloons per degree for each attack is ideally equal to twice the Total Boss Damage. However, this currently only applies to Degree 1-19.

Pierce: The pierce of each attack scales with degree according to the following formula:

Where "D" is degree and p0 is the pierce of that attack at Degree 1. This can be found on each individual Paragon's page

Attack Speed: The delay between attacks shortens with degree according to the formula:

Where "D" is degree and r0 is the rate of that attack at Degree 1. This can be found on each individual Paragon's page

Listed are some general guidelines on how to make select 20 degree increment Paragons.

For most Paragons, excluding Apex Plasma Master, Degree 76 is the highest degree possible in single-player mode. This is because Degree 77 requires 110,706 power, which is only achievable by placing additional tier 5 towers.

If, after following the guidelines above, the Paragon is not reaching the desired degree, ensure the following:

Paragons behave in large part, like any other tower. However, they are not able to receive most buffs or participate in most tower interactions. A few of these behavior quirks are listed.

Paragons combine all three attacks of their constituent tier 5 towers to deal immense damage to all bloon types. However, the high cost of these upgrades and lack of ability to receive buffs makes them difficult to justify in the presence of cheaper combinations of towers (such as Ultraboost and Flying Fortress). As a result the main use cases for Paragons, as of now, are during late game and Boss Events.

In any case use of a Paragon requires a robust farming set up, setup of the sacrificial towers, and time to accumulate pops in order to maximize damage output.

Paragons share a number of similarities to the Vengeful True Sun God (VTSG) in terms of function and gameplay mechanics.

For these reasons, Paragons may be seen as the "Vengeful True Sun God" analog for each tower.

The first Paragon to be revealed was the Paragon Dart Monkey, the "Apex Plasma Master", as part of the second teaser for Paragons. The same teaser also features a mysterious language whose letters arrange to form the word "paragon". The second Paragon revealed is a merge for the Boomerang Monkey, the "Glaive Dominus", as seen in the third teaser for Paragons; this teaser features the same mysterious language writing seen in the Dart Monkey Paragon teaser.

Ninja Kiwi confirmed with their 16th July 2021 blog that the There Can Be Only One MK would remain the same. Unlike VTSG, the Super Monkey Paragon is expected to not need Monkey Knowledge, will not require Sacrifices for the Temple and True Sun God upgrades, and can allow The Anti-Bloon and Legend of the Night to be spawned after its own upgrade. Potentially, the VTSG can be summoned after the Super Monkey Paragon is upgraded.

In that blog, when asked whether the Sentry Paragon would receive a name change after the release of Paragons, Ninja Kiwi said "Probably not!" However, the upgrade was later was renamed to Sentry Champion in Version 28.0.

Weekly since the release of Version 27.0, starting from the first Friday since the release date of said update, Ninja Kiwi answered several questions regarding Paragons, including their development and some lore about them. Ninja Kiwi's 30th July 2021 blog reveals a response that stated that they are working on releasing all Paragons but will need time to balance every Paragon before they can officially make any announcement for releases of them. Paragons were further revealed on their August 6th 2021 blog, with refinements on what is being developed in regards to the Paragons and how each Paragon will be released and dealt with in the future.

On 6th October 2021, Ninja Kiwi teased the Ascended Shadow, as shown on their Twitter page. It was later released in the 28.0 update.

On 4th December 2021, Ninja Kiwi teased the Navarch of the Seas on their Twitter. It was later released in the 29.0 update.

Almost week since Version 27.0, information related to Paragons is answered in the NK Blogs. It may contain an indiscriminate amount of information about them, but the below information is all the information gathered out of the blogs since the release of Paragons.

Initial reception of the Version 27.0 Paragons did not feel strong enough according to the BTD6 community, so some of them were buffed.

For information specifically relating to individual Paragon types, refer to their respective pages.

Boomerang Monkey's upgrade menu, prior to unlocking its Paragon

Victory Card Upgrade Notation showing the Paragon being considered a 6-0-0 tower, rather than a 5-5-5 tower. 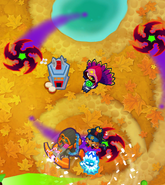 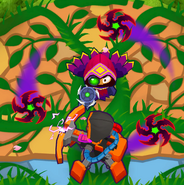 Victory Card Upgrade Notation showing the Paragon being considered a 5-5-5 tower rather than a 6-0-0 tower, as of update 28.0

No two Paragons of the same type can be on screen, even on Co-Op

The paragon towers so far, placed down. 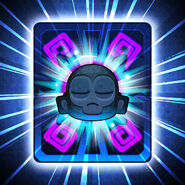 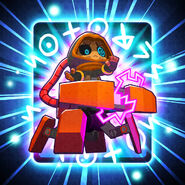 The Boomerang Monkey Paragon (Glaive Dominus), as teased on Facebook. 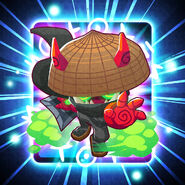 The Ninja Monkey Paragon (Ascended Shadow), as teased on Twitter. 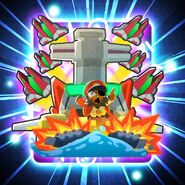 The Monkey Buccaneer Paragon (Navarch of the Seas), as teased on Social Media. 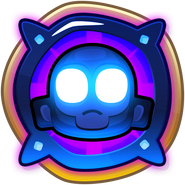 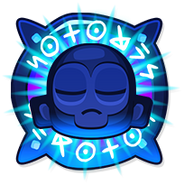