Oversize Nails is the 1st upgrade of Path 3 for the Engineer Monkey in Bloons TD 6. It corresponds to the 9-Inch Nails upgrade from the BTD5 generation. It increases the pierce of the main Engineer's nailgun nails from 3 to 8, and allows them to pop Frozen Bloons. Unlike BTD5, this upgrade now also affects Sentry Guns, which now gives the Engineer's sentries +1 pierce and the Shatter damage type (which pops frozen). It also increases Cleansing Foam pierce by +5.

Engineer Monkeys with Oversize Nails sport a black cap with a grey front face, as well as a nail gun with a slightly longer grey barrel, instead of the short black barrel of the base nail gun.

When used as a crosspath, the nail gun remains as-is, but the amount of grey on the front or black at the back of the Engineer's helmet/cap varies.

Oversize Nails improves overall pierce for the Engineer Monkey and allows the Engineer and his sentries to pop Frozen Bloons. This is most useful with countering grouped bloons, more specifically in the early-game, or to improve sentry performance later on. 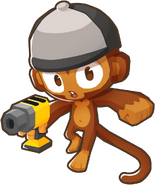