Overclock is the fourth and final upgrade for the Monkey Engineer on the second path. It gives the Monkey Engineer a Special Ability that, once used, turns the cursor into a flaming wrench. Once a tower is clicked with this wrench, it doubles its attack speed. This effect lasts for up to 60 seconds, but as the ability takes 60 seconds to recharge, the ability can be used again immediately. If used on a Monkey Village, the influence range is increased by 25%, and it affects the High Energy Beacon's giant laser for the full duration. Using Overclock on a Banana Farm forces all the bananas out instantly.

Despite having exactly the same mechanics as in BTD5, it is not as powerful in BTDB Mobile because players would more likely have multiple less powerful towers rather than a smaller number of more powerful towers. Because of this, Overclock has received many price buffs.

On the other hand, in Version 4.3.1, a minor bug fix that fixes the length of the Overclock cooldown has made Overclock a little less powerful.

Overclock ability cooldown timer now starts upon tower selection, rather than as soon as the screen opens.

Use this ability on strong towers like Sun Gods, Apache Dartships or Spectres to maximize the bonus. It can also be combined with a High Energy Beacon to decrease the cooldown time or an M.I.B. Call To Arms to provide an even greater power boost. 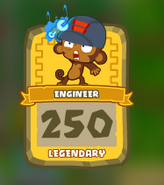 Overclock in a game

Overclock BTD5 Icon
Add a photo to this gallery

Retrieved from "https://bloons.fandom.com/wiki/Overclock_(BTD5)?oldid=267801"
Community content is available under CC-BY-SA unless otherwise noted.