Note: This map is actually named #Ouch, but this article's link is named differently because of technical restrictions in WikiText.

The bloon path is shaped like a hashtag symbol, with four entrances and four exits. Bloons go straight across the path and leave from the exit in front of them. There is water in the middle, which you can place water towers on. You can place a max of 9 Monkey Buccaneers (10 with extreme precision) or 13 Subs on it.

However, if extra land space for towers is desired, one can remove the water from the middle for $1000. One cannot drain the water if water towers have already been placed in the water.

The hashtag (#) refers to the shape of the area, with "ouch" referring to the difficulty. 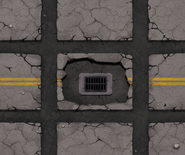 A picture of #Ouch drained