Bloons Wiki
Register
Don't have an account?
Sign In
Advertisement
in: Articles in construction, Articles with visible wiki comments, Articles that need more sounds,
and 4 more

Ninja Kiwi is the game developer behind all Bloons games, along with many other games that don't have to do with the Bloons games. They are based in Auckland, New Zealand, but their target audience is the United States. They have been making online games since 2006. Ninja Kiwi started developing games in a spare bedroom with two people working part-time. They are currently working in an office with 15 people working full time. When the revamped website went into beta, it became no longer reliant on Cookies when logging into a Ninja Kiwi account. Older designs of the website can be found here.

On 24th/25th March 2021, Ninja Kiwi announced that they have become acquired by esports company Modern Times Group (MTG). They made an announcement on r/btd6 on here to announce the special announcement of recent acquisition here.

200 to "Celebrate Independence Day," as well as another double MM period.

Following the change of dealing with Adobe Flash games, Ninja Kiwi has changed the design of the website entirely on March 2021.

On 25th/26th March 2021, Ninja Kiwi hosted a AMA about potential future developments for the Bloons games. According to the AMA, there is evidence that a number of different topics have been revealed:

Ninja Kiwi releases a blog each week to add news on any news for their games. Every week, they will answer approximately 30-40 questions per week provided from various fans of their games. The majority of questions since late-2018 are related to Bloons TD 6, given their highest focus on that game. There is often more focus on currently hot topics relating to games; a particularly notable example is the Version 27.0 update with Boss Bloons and Paragons, where Ninja Kiwi elaborates further about the progress of those two long-awaited major new features.

As of 18th February 2022, according to their 18th February 2022 blog, Ninja Kiwi has plans to invest their resources primarily to regularly update BTD5 Mobile, BTD6, Battles 2, and Bloons Pop!, but no other games.

Ninja Kiwi itself is not a subject with associated sounds, but its production logos do. Sounds for Ninja Kiwi logo began in the Flash version of Bloons 2. 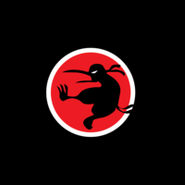 Ninja Kiwi logo as of the BTD6 generation games

Ninja Kiwi logo as of Battles 2