Ninja Discipline is the 1st upgrade on Path 1 for the Ninja Monkey in Bloons TD 6. Ninja Monkeys with this upgrade attack +66% faster (with the shuriken attack increasing from 0.70s to every 0.42s), along with a +7 range increase (equivalent to +17.5% increased range for all attacks).

All secondary attacks such as Caltrops, Flash/Sticky Bombs also increase in attack speed.

In BTD6, the upgrade picture is a shuriken which appears to be fast moving. The Ninja Monkey gains a white headband.

Compared to BTD5, Ninja Discipline improves the attack speed of the ninja by much more (66% compared to 20%). It can no longer have both Distraction and Seeking Shuriken at the same time, as those upgrades are mutually exclusive as crosspaths for this upgrade. Ninja Discipline did not receive any balance changes since it was first released in BTD6. 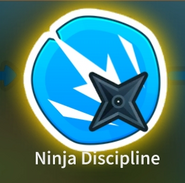 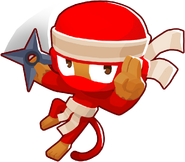 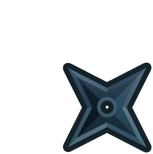