Night Vision Goggles changes the Sniper's beret from red to blue, or the color of other crosspaths if any, and it receives green goggles with a black strap covering the monkey's head. The goggles supposedly are night vision goggles.

When crosspathed with any upgrade except Tier 5, the Sniper is the same as its non-crosspathed counterpart except gains the green goggles. For Full Auto Rifle, the goggles are modified to have small lenses and are directly attached onto the helmet by a grip.

Night Vision Goggles not only gives the Sniper with the needed camo popping power, it also makes the Sniper an effective option at specifically countering Camo Bloons. Much of the power of Night Vision Goggles is centered in the early-game at handling early Camo Bloons, especially set on Strong and with the Camo Prioritization target option enabled.

Creatively, a buff for Path 2 crosspathing has been given to this upgrade by allowing the bullet to deal extra damage to Camo Bloons, starting from Version 11.0. Version 28.0 buffed Night Vision Goggles yet again to be a further camo specialization by introducing Camo Prioritization to various camo-detecting upgrades including this upgrade. 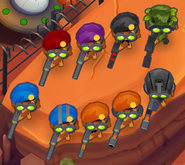 Night Vision Goggles dealing 4 damage to a Camo White, due to +2 damage to Camos 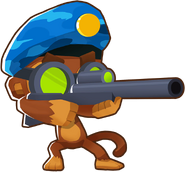