Neva-Miss Targeting (also known as Neva-Miss) is the Tier 3 upgrade of Path 3 for the Monkey Ace in Bloons TD 6. Just like the BTD5 counterpart, this upgrade will allow the darts to actively home in on bloons. The difference from the older version, however, is that all darts will always seek at bloons regardless of position. In this way, this optimizes the potential of each dart to hit as many bloons as possible, and therefore practically "never miss". It also increases each darts projectile speed and lifespan by ~50%.

Neva-Miss Targeting adds a pair of jet engines with flames protruding out the end to the Monkey Ace's plane. The wings change from red to black, while the body of the plane remains red. It still keeps its propeller.

The homing power of Neva-Miss Targeting greatly increases the efficiency of each dart, almost guaranteeing that each dart doesn't waste any damage potential. The sheer amount of projectiles and moderate attack speed makes it a good option for Berserker Brew and Stronger Stimulant, increasing potential popping power even further. Overall, it is a good upgrade all-round on maps where conventional meta early mid-game towers such as 2-0-4 Armor Piercing Darts + Alch or 4-0-2 Bloonjitsu + Alch are less viable, specifically on maps with either lack of water, or overcoming limitations in range or Line of Sight.

Neva-Miss Targeting has been buffed slightly to make its homing functionality more smart. 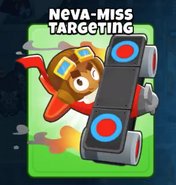 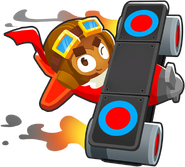 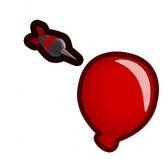