Necromancer: Unpopped Army (shortened to Necromancer) is the fourth upgrade of Path 3 for the Wizard Monkey in BTD6. It causes all bloons popped near the Wizard to become undead bloons that travel towards the entrance and deal damage to bloons they touch (including Purple and Lead Bloons). Each undead bloon deals 2 damage per hit and has a random amount of pierce between 2 and 11, lasting for up to 10 seconds. Level 11+ Ezili increases the pierce of undead bloons by 50%, which is applied before other buffs to pierce.

Unlike the appearance of the Shimmer predecessor, the Necromancer's cloak is almost entirely black, with purple trims on the sleeves and the hood. The hood now is adorned with a skull that has glowing green eyes, and the Necromancer's skin has also become entirely green (although most of his face is hidden by mummy bandages). The Necromancer also wields a skull-topped staff, which seems to be telekinetically controlled.

Every time a Necromancer summons undead bloons, it will randomly consume 1-10 graveyard units. 1 to 4 undead bloons are summoned at a time, each consuming the previously mentioned quantities of graveyard space. Each undead bloon has 1 base pierce and gets bonus pierce equivalent to how many graveyard units were consumed.

Graveyard units stored in a Necromancer last for up to 2 rounds before being automatically depleted.

Necromancer: Unpopped Army is one of the strongest towers for its cost as of Version 21.0. It can deal serious damage if it is can amass undead bloons, but it is less effective against waves of MOAB-Class Bloons, since each one generates very few undead bloons when popped. It is one of the best towers in the earlier mid-game as a cleanup option. Pairing it with nearby towers for extra damage helps optimize the Necromancer's overall performance and keep its graveyard full more often. If placed in a good position with supporting damage, one Necromancer can easily reach well over 100,000 pops by round 100.

Necromancer has been buffed by a significant amount since it was first released. Additional undead bloon spawns, a slight overall cost reduction, extra damage, and reworked local graveyard mechanics are all important factors to shaping it into a very strong option for mid-game damage when paired alongside additional towers.

Necromancer artwork in the upgrade menu 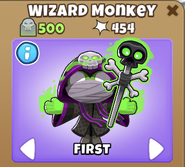 Necromancer menu as of Version 18.0

Necromancer's new spawning algorithm, spawning undead bloons from the back of the track

Unpopped Bloon that spawns from the Necromancer.