Back to page
Edit

The Big One
Artillery Battery

Mortar Tower is a tower operated by a monkey that attacks slowly by shooting mortar shells at a pre-selected target on the map. It is one of the few towers with infinite attack range. Its target area can be selected by first clicking on the Mortar Tower before clicking on any area on the map you want it to attack. On the Mobile/Steam version, the target can be re-aimed by tapping the tower once, tapping TARGET and then tapping where you want it to aim. It will continue to attack the selected target area every 4-5 seconds.

This tower is effective at bombarding the beginning area to thin out bloons and also when shooting at areas such as U-shaped tracks and in between two close tracks due to its area effect. Once it has its Bloon Buster upgrade, it can destroy two layers of bloons, although it is still ineffective against Black Bloons and Zebra Bloons until it is upgraded to The Big One or Burny Stuff.

Explosions are generally nerfed in mobile, and like the Bomb Tower the Mortar Tower is no exception to this.

Explosions from the Mortar Tower are smaller.

If a 3/x Mortar Tower attacks a Rainbow Bloon, it will not be popped down to Black and White Bloons. This happens even if the tower is under the influence of an x/3 Monkey Village.

Previously, the Mortar Tower was not a popular tower. This was because compared to its flash counterpart, the Mortar Tower had a much smaller blast radius, which drastically hurt its reliability. Over the years, however, it has gained popularity through a set of buffs, particularly with Version 4.1's update, and has now become part of the meta. Even with a somewhat major nerf in Version 4.6, it still remains as one of many popular towers in the game. Popular loadouts include Ninja Farm Mortar, Tack Farm Mortar, and Bomb COBRA Mortar. 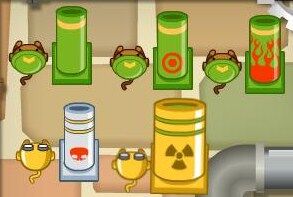 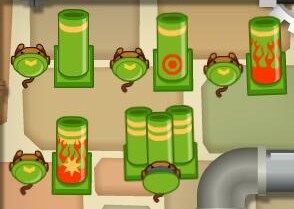 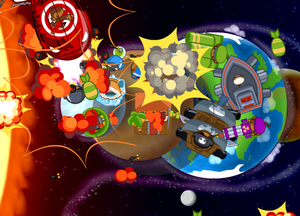 Pop and Awe in useage 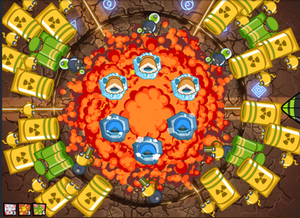