Bloons Wiki
Register
Don't have an account?
Sign In
Advertisement
in: Articles with incomplete sections, Mortar Monkey, Towers,
and 3 more

The Mortar Monkey is a Military-class tower that arrived in update 6.0 of Bloons TD 6 on September 17, 2018. The tower retains its role from the Bloons TD 4 and 5 Generation, with significant updates, including a name change from "Mortar Tower". It was first teased on Twitter September 15th, 2018 just two days before Version 6.0 was released.

Mortar Monkeys launch explosive shells at any location on the map as set by the target reticle. As a base tower, it attacks slowly and inaccurately, but packs with a large base pierce of 40 per explosion, and starts off with a blast radius of 20. The base tower has a projectile deviation radius of 18, meaning its shots will be centered anywhere around an 18 range radius from the center of the target reticle, alongside a 0.5s deploy time between firing from the barrel and hitting the shell onto the ground.

When micromanaged properly, the Mortar Monkey is a powerful versatile long-ranged explosive tower. It comes with various upgrades to assist its power such as extraordinarily large and deadly explosions, hypersonic attack speed, stunning waves of shells, and utterly devastating incineration. It is also the only tower able to liberate the Cave Monkey.

The Mortar Monkey is a returning tower from Bloons TD 5, returning to Bloons TD 6 since the Version 6.0 update. Several changes have occurred from BTD5, the most significant example being that it can no longer apply Burny Stuff to Black Bloons nor remove camo from Black Bloons via Signal Flare, both of which without MIB would simply not work.

Like other versions of it, the Mortar Monkey still has one yellow stripe on the green military helmet it also wears in other games (which doesn't have a chin strap on it like actual helmets do). The mortar, however only has one yellow line instead of two like in the artwork of BTD5 and BMC, making it a lot closer to the model in the game. The base of the mortar has screws, but it still has the ability to turn around freely when the players "micro" it like in other games. Another thing can be spotted is that while in other games, the monkey is always to the left of the mortar, this game however, has the monkey to the right. The tower itself also no longer has a reload animation. Instead, it now has a lever to pull, which will automatically reload and shoot the mortar in just a few seconds (with Heavy Shells and further upgrades, it presses a button on a remote control to launch attacks, particularly with faster upgrades such as Artillery Battery and Pop and Awe).

Path 1 improves the Mortar Monkey's explosive potential. The first upgrade of this path is Bigger Blast, which increases the blast radius of the Mortar Monkey's explosive shells. Bloon Buster returns as a Tier 2 upgrade, increasing explosion damage from 1 to 2. Shell Shock is a new Tier 3 upgrade that allows it to create a secondary explosion for each explosion, a shockwave that either stuns bloons close to it or damages bloons further out. The Big One further improves the explosion radius and damage just like its BTD5 counterpart. The final upgrade, The Biggest One, boosts its damage to 20 per explosion and an extra +20 to Ceramics and MOAB-class.

Path 2 increases attack speed of the Mortar Monkey and lets it gain special military-themed combat against bloons. Following a military theme, the first two upgrades Faster Reload and Rapid Reload both provide extra attack speed, while later upgrades allow it to become more powerful as a countermeasure to various types of bloons. Heavy Shells allows the Mortar to damage Black Bloons and deal bonus damage to a variety of different bloon types, specifically to Ceramics, MOAB-class, Fortified, Lead, and bloons affected by stunned status effects. Artillery Battery further increases attack speed for a greater performance at bloon destruction, in addition to gaining the Bombardment ability. Its Bombardment Ability unleashes a rapid fire attack in a slightly wider area. Pop and Awe gains much more specialized damage, and gains a much powerful replacement for the Bombardment ability, the Pop and Awe ability. Activating it causes all bloons on screen to be perpetually damaged and stunned for an extended period of time.

Path 3 is a new path dedicated to accurate firepower. Increased Accuracy increases accuracy of the Mortar's targeting, allowing it to hit its intended location more accurately. Burny Stuff upgrades the attack to gain a burning napalm on bloons damaged by its explosions, causing affected bloons to slowly damage over time. The aspect of flammables remains largely untouched with its two further upgrades, but still sticks to the theme of accurate firepower. Signal Flare allows the Mortar to detect camo and strip camo off damaged bloons, while Shattering Shells further improves the aspect of removing special bloon properties by stripping any non-MOAB-class bloon property and removing fortified off any bloon up to BFBs. Blooncineration brings back the burning aspect of this upgrade path, firing barrages of searing hot explosives that deal immense burning damage to affected bloons and generate infernal blazes at the center of each explosion.

This section displays Monkey Knowledge that has effects on Mortar Monkey and its changes when compared to one by default:

It was teased a few days earlier on Twitter, on November 16th 2018.

Listed are comparisons of the Mortar Monkey in comparison to how they work in BTD5. Takes into account Flash and Mobile versions.

Note: Lists all balance changes implemented for the Mortar Monkey when it was first released in Bloons TD 6 (November 20th 2018) in comparison to Bloons TD 5. Takes into account both Flash and Mobile versions. 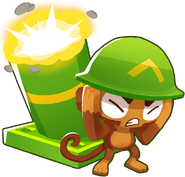 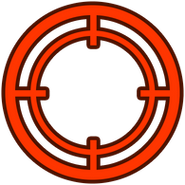