+50% cash per pop from nearby towers, additive to other per-pop income
+1 Free Dart Monkey, generated after round ends
+10% income from all nearby towers

Monkeyopolis is the final upgrade of Path 3 for the Monkey Village in BTD6. Once bought, it sacrifices all non-Tier 5 Banana Farms within its radius and in turn generates its own far superior income generation. Instead of having a single price, the cost increases for every Banana Farm in its radius. It cannot be bought in Deflation Mode and C.H.I.M.P.S. as Banana Farms are disabled by default, unless in a special challenge that enables Banana Farms.

It costs $5000 per Banana Farm regardless of difficulty, the $5000 minimum being the cheapest Tier 5 upgrade cost in the game. However, a visual bug displays wrong prices (see Bugs). With only one Banana Farm in its radius, it is the only Tier 5 upgrade that has a base cost of less than $10,000.

Monkeyopolis upgrades the building into a much larger, more developed town hall with a few huts surrounding it. The Monkeyopolis' clock in-game moves based on your device's time. Just like with Monkey City, on every 5th minute, the minutes hand changes position, and the same applies to the hours hand.

While the sacrifice of all the Banana Farms is quite extreme given both the cost of the upgrade and the lost money that could have been reclaimed when selling each Farm individually, Monkeyopolis releases massive amounts of money. Not only does it increase farm production vastly, it is also is able to comfortably compress up to 8-10 farms into the space of a single village's range. While on most maps, there is not enough space to place that many farms, it is still extremely powerful with few farms sacrificed to it. The main issue with Monkeyopolis comes with the fact that its role is usually largely unneeded. High-tier farms are usually not needed on late-game runs due to the fact that money rarely runs out after the initial farming. Furthermore, the Sun Temple and True Sun God provide a lot of money with their support sacrifices already, and are already the main pushing force of late game.

However, Monkeyopolis can be pivotal in Boss Battles. This is since the game mode requires farming to be as quick and optimal as possible, making Monkeyopolis no longer redundant.

In Version 11.0, Monkeypolis was adjusted to only produce up to 10 crates per round but scaling in income per crate if given over $20,000 worth of Farms. This was to make picking up Monkeypolis crates easier to deal with. 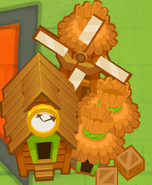 Monkeyopolis nearby the giant windmill in Town Center

Monkeyopolis with a wide array of crates (Sacrifices: 7 4-2-0 Farms on Easy, before Version 11.0) 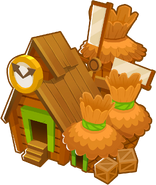 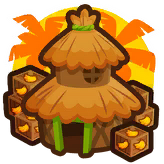