As the final upgrade of Path 3 Banana Farm, Monkey Wall Street retains all of its income methods and benefits from the previous upgrade, including the increase to Path 3 Buccaneers. The only major improvement is the bonus $4,000 provided at the end of a round. This means that Monkey Wall Street provides the single greatest source of income without any form of player input, trailed behind by the Trade Empire at maximum capacity when compared on a single tower basis.

Just like its preceding upgrade, the optimal cross-path varies depending on whether Monkey Knowledge is enabled or not. It is worth noting that the end-of-round-income is not affected by cross-pathing. 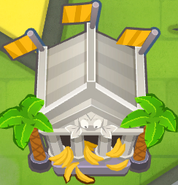 Monkey Wall Street
Add a photo to this gallery