+50% cash per pop from nearby towers, additive to other per-pop income

Monkey Town is the third upgrade of Path 3 for the Monkey Village in BTD6. It grants all nearby towers +50% (+60% with "Inland Revenue Streams" MK) cash per pop. It also comes with the benefits of Monkey Business and Monkey Commerce, allowing it to discount nearby towers and upgrades up to Tier 3 by at least 15% (up to 25%) from the aforementioned upgrades.

Monkey Town is a congregation of three rural huts in a triangular formation. The main hut has a wooden entry step in front of its entrance. The banana sign is removed from the Monkey Village, while the wooden crates are placed on the same location as with Monkey Commerce, Monkey Town's previous upgrade. Path 1 crosspaths change the color of all Village bands from green to red, and drums from Jungle Drums are placed on the player's left. Adding Path 2 crosspaths adds a signal apparatus above the main hut.

The following are tables displaying the maximum income gained from Monkey Town between Rounds 1 to 100.

This section includes Standard Rounds and rounds from Alternate Bloons Rounds, up to Round 100 for the sake of practicality. By default, Monkey Town will grant towers within range with +50% cash per pop. Provided that all towers that can damage bloons receive the Monkey Town buff, the maximum income-generating value of all Monkey Towns will be achieved.

Below is the maximum income able to be generated from Monkey Towns without "Inland Revenue Streams" MK.

This section includes Standard Rounds and rounds from Alternate Bloons Rounds, up to Round 100 for the sake of practicality. With "Inland Revenue Streams" MK, Monkey Town gives nearby towers with +60% cash per pop instead of +50%. Provided that all towers that can damage bloons receive the Monkey Town buff, the maximum income-generating value of all Monkey Towns will be achieved.

Below is the maximum income able to be generated from Monkey Towns with "Inland Revenue Streams" MK.

Monkey Town grants +50% income per pop for all towers in range. As a result, Monkey Town has become a competitor in terms of efficient income generation, though Banana Farms are still generally the more efficient form of income generation overall due to their independence from bloon pop income.

The best way to maximize Monkey Town income is to bunch as many towers within the radius of the Monkey Town as possible, particularly the ones that pop the most amount of standard bloons. Standard bloons become the sole dependent staple of income for any form of Monkey Town income generation, which consist of almost all of the income that a Monkey Town generates. Monkey Towns are highly affected by later rounds that decrease per-pop income, though several anomaly rounds occasionally may allow unusually increased income to be gained in spite of late-round income penalties.

Understanding the amount of income gained from pops in a round is important to consider before determining the efficiency of a Monkey Town compared to other methods of income, the following tables display how much cash Monkey Town will provide by fully popping a bloon under its effects:

The general trend is that the average income will increase with later rounds, though there are some periods where the average income will diminish. There are also some rounds with really low income generation compared to the general income rising trend, most notably Round 90 (giving only $74.65), although other income methods such as Lead to Gold may be used to gain larger quantities of income during those rounds.

Monkey Town has not been nerfed or buffed since it was first added in BTD6. However, it is worth a note that, like most towers, Monkey Town was slightly impacted by the added mutual exclusion of certain upgrades that were previously purchasable on the same tower in the BTD5 generation. More specifically, Radar Scanner and Jungle Drums are now mutually exclusive.

BTD6 upgrade icon as seen on the upgrades menu 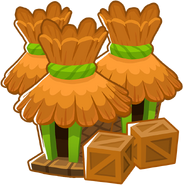 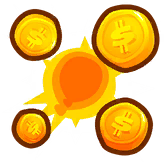