Bloons Wiki
Register
Don't have an account?
Sign In
Advertisement
in: Articles in construction with a WIP, Wizard Monkey, Bloons TD 6,
and 6 more

Monkey Sense is the second upgrade on the third path for the Wizard Monkey in Bloons TD 6. It allows the Wizard Monkey attack Camo Bloons. Unlike BTD5, this upgrade is along a different path to Fireball and all other fire-related upgrades. In addition, Monkey Sense Wizards gain access to Camo Prioritization target options.

Visually, the monkey gains a pair of large thin black spectacles, along with a wide-brimmed wizard hat with purple crescents and a large purple gem on the front.

Monkey Sense can access Camo Prioritization, allowing all its attacks to prioritize Camo Bloons over other types when this secondary targeting option is active.

Simply speaking, this upgrade gives the Wizard Monkey camo detection. In practice, Monkey Sense is useful with Path 2 for cheap Camo Lead popping power, or with Path 1 to pass walls and home energy at bloons. It is also useful for Arcane Spike to detect DDTs.

Mostly inherits buffs from Intense Magic and the base Wizard. However, Version 28.0 changed Monkey Sense to work as a camo specializer, gaining a Camo Prioritization target option that specifically targets Camos first. 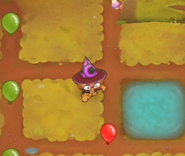 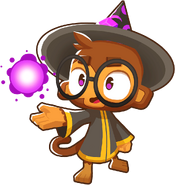 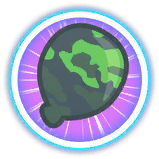