Monkey Pirates is the fourth upgrade of Path 2 for the Monkey Buccaneer in Bloons TD 6. Along with gaining the MOAB Takedown ability, which allows it to instakill the strongest MOAB-class bloon on-screen (up to a BFB or DDT) with a single hook, this upgraded Cannon Ship now shoots 3-bomb sprays instead of singular explosives and they each deal +1 damage, and its grapes deal +1 damage to Ceramics.

The boat of the Monkey Pirates is upgraded into a proper pirate ship. Two greyish-blue skull pirate flags on two newly installed masts, one in front, are placed in the middle of the ship. Three cannons now appear on each side of the ship, with the game portrait showing a large metal hook. The ship now features a greyish-blue painted rim around it and its bow. There is a cabin at the back, although not so visible. The pirate smiles menacingly, grows a beard, and wears a golden tooth.

Monkey Pirates' signature mechanic is its MOAB Takedown ability which, every 50 seconds, allows it to instakill the strongest MOAB on screen, up to a BFB or DDT with a single hook.

Additionally, it adds 2 more Cannon Ship cannons to either side of the ship, thus firing 3 cannonballs per shot, each also dealing +1 damage, for 2.

Monkey Pirates targets bloons using the standard target priorities. It has multiple types of attacks that are shot in different styles. It can also utilize multiple targeting to shoot projectiles from both ends of the boat if it detects bloons on its opposite side.

When given the Crow's Nest upgrade, all its attacks can prioritize Camo Bloons over other types, which is provided by the Camo Prioritization targeting.

MOAB Takedown Ability is the Special Ability for Monkey Pirates; it has a 50-second cooldown. Upon activation, the ship hooks in the strongest MOAB-Class Bloon on screen, up to a BFB or DDT, with a harpoon and destroys it completely.

The player is rewarded an equivalent amount of money as if the whole blimp was destroyed in its individual parts. Adding Monkey Town adds +50% (+60% with "Inland Revenue Streams" MK) more income, and Monkey City increases it by an extra +15%. A blimp affected by Rubber to Gold adds +200% income.

This table shows the income earned for different blimps, considering no cash bonus was applied.

Monkey Pirates combines decent damage with an added ability to take down a MOAB, BFB, or DDT when necessary. Its overall grouped bloon damage is pretty respectable with its improved extra damage three-cannon attacks, allowing it to deal good damage against regular bloons. Usually, Monkey Pirates is purchased for its ability to instakill early MOABs and early BFBs, but it can serve helpful bloon damage on later rounds too.

Monkey Pirates received both buffs to the main attacks and to the ability's cooldown reduction. The Version 15.0 and 17.0 buffs have made it both stronger at damaging grouped bloons and more reliable at hooking in stronger early-to-mid-game blimps. 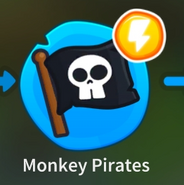 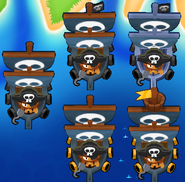 Monkey Pirates shooting three bombs at once, with one recently exploded 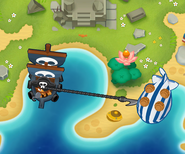 Hooking in a MOAB

Hooking in a BFB

Hooking in a DDT 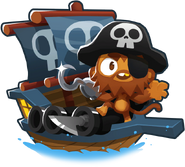 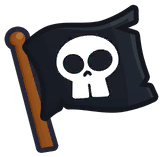 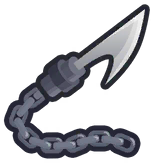