Monkey Knowledge is an enhancement system that features in Bloons Monkey City and in the Mobile version of the game in which incremental improvements in tower performances can be unlocked. Monkey Knowledge is gained from Monkey Knowledge Packs which may be accessed after attaining city level 12. MKPs can be obtained by capturing Tiles, opening Treasure Chests or from game events (such as Monkey Teams and Festival of Bloonstones), from Contested Territory milestone and occupation events and from defeating Boss Bloons. These special packages contain Cards which give points to a Monkey Knowledge Book. If a card gives points to a Monkey Knowledge Book to a tower that is maxed out, the rest of the cards points will convert to coins equal to 100x times the amount of experience the card would normally give.

Bounty cards were added in on September 1, 2015 to the Flash version. They were not added to mobile devices until mid-December of that year.

There are 3 different types of knowledge packs: Normal, Ancient and Wild.

To start earning Monkey Knowledge Packs the player's city must be at least Level 12. They can be obtained in both cities.

50. As of about 10th December 2015, every 7.2 minutes you wait for the Bloon Beacon to recharge will force you to pay one less Bloonstone if you want it to instantly recharge, up to a minimum of

There are many events that can earn Monkey Knowledge Packs. These include Festival of Bloonstones, Boss Battle and many others.

Beating the Boss Bloon at a certain round will earn the said rewards.

*City cash rewarded after rank 15 is achieved in that book, excludes wild cards.

The 2112 MKP cards were turned to present:

These packs always contain one Rare card, the other three cards have a certain probability to occur:

These packs always contain one Legendary card inside, the other three cards have a certain probability to occur:

Note that Ancient Packs are effectively normal Monkey Knowledge Packs but with all cards boosted up one rank.

These packs contain one Rare wild-card, the other three wild-cards have a certain probability in which they occur:

Instead all 10 Bounty Cards possibilities, there can be only the

Bounty Cards were added in v150831, which was released on August 31st, 2015. There are 10 (11 in mobile) different rewards possible, all with the same chance appearing:

Monkey Knowledge has 15 Levels which require a certain amount of points:

As seen in this Ninja Kiwi Forums thread, the rankings do not work the same as in Flash. Instead of hard-capping at 2500 points from Rank 5, the points required to go to the next rank is increased by an extra 2500 points per rank.

A Wildcard has the same chance to occur as all other upgrades. It can be used to give points to the Monkey Knowledge Book of your choosing. They have the same chance to appear as any other card, and are always granted in Wild Card Packs.

Upgrades that may enhance certain strategiesEdit

Upgrades that may prevent certain strategiesEdit

An Ancient Pack floating around waiting for it to be opened

Assigning a Wild Card to any Knowledge Book

Four cards that were found from an Ancient Pack

Towers ranking up from a Monkey Secret Card

A view of four cards in BMC Mobile

Wild Cards can be stored in a leather card case

The Monkey Knowledge Pack icon bouncing around trying to get attention

An extremely rare case of having four Legendary Cards

A BMC Mobile Ancient Pack floating around waiting to be opened

The Picture of the pack only

The Jester Monkey as appearing on the Rare Wild Card.

The Monopoly Monkey as appearing on the Rare Monkey Tycoon Card

Still image of the dramatic opening of a Legendary Card

Another still image of the dramatic opening of a Legendary Card

A Legendary Card as it is being collected

Part of an animation of a Rare Card

Part of yet another rare card animation (again, ignore the sparkles)

Ignition animation of an uncommon card

An uncommon card turning over

The back of a Monkey Knowledge Card

A blank card before revealing its type

The blackened card shows the card is definitely a Monkey Secret

Opening a Monkey Knowledge Pack with the box being broken open

Triple legendary in an Ancient Pack with a Bounty Card.

2 legendaries in a single Monkey Knowledge Pack (not Ancient Pack)

Rare case involving three of the same card and rarity

Wild Card pocket with hand guide, alongside Rank 4 and 5 books.

Turning over a Monkey Secret card

The Bounty Card for {{Wild Pack}}2

The Bounty Card for one of each Boss Ability

The Bounty Card for {{Supply Crates}}5

The Bounty Card for {{Monkey Boosts}}5

The Bounty Card for {{Bloonstones}}30

Monkey Secret
Add a photo to this gallery 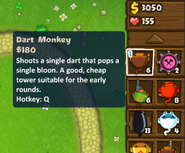 Squashing in many MOAB Maulers with the 5% footprint decrease knowledge

0/1 Buccaneer shooting 6 grapes, of which one hit a bloon

0/0 Spike Factory dispensing 7-spike piles, while a 1/0 Sniper shoots down Black Bloons down to Red Bloons 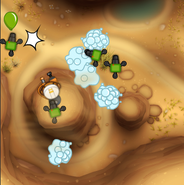 Effect when Cleansing Foam cooldown is decreased by 0.75 seconds 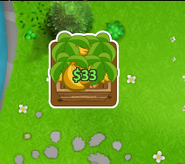 Calculations on time to aquire each level