Monkey Intelligence Bureau (sometimes abbreviated as MIB for short) is the third upgrade of Path 2 for the Monkey Village in Bloons TD 6. It grants all the towers in its radius effectively the Normal (

, i.e. affects any bloon type) damage type. All towers within its radius can pop Lead Bloons, Thermal Bloons, Frozen Bloons, and Purple Bloons, on top of camo detection via its previous Radar Scanner upgrade. This includes bloons that contain any mix of these aforementioned bloon attributes.

Note that the Monkey Intelligence Bureau buff does not necessarily grant towers the ability to target or affect any bloon type including MOAB-class bloons, but it allows them to damage any bloon type. Most attacks with status effects exclusively dependent on a direct attack rather than dependent on affecting specific tiers of bloon (e.g. Counter-Espionage shurikens removing camo from Camo Leads is independent from tier of bloon, but Pin's pinning effect on a Lead or Ceramic is not) are also affected by MIB. In some very special cases, the Monkey Intelligence Bureau can help grant certain towers with the ability to allow specific attacks or status effects to affect and target specific bloon tiers, but only up to Rainbow.

Monkey Intelligence Bureau turns the entire Village into a high-tech pentagonal-shaped steel building. It retains its pair of rotating radar speakers on top of a radio tower stand. Across the building, it has three orange windows per side. The door and entrance appear to be made of concrete.

The upgrade icon for Monkey Intelligence Bureau is not the same as it does in BTD5. It now appears to slightly resemble the COBRA but with sunglasses. It is a monkey in a black three-piece businesswear wearing black sunglasses.

Just like in BTD5, the Monkey Intelligence Bureau upgrade allows nearby towers to damage any bloon property. More specifically, the Monkey Intelligence Bureau awards an equivalent of the normal damage type to all nearby towers, allowing them to deal damage to any type of bloon property. Most of the non-MOAB status effects can additionally affect any type of bloon up to Rainbow.

However, this will not grant power to attack or affect MOAB-class, such as BADs, if the tower cannot attack them, like BTD5. It also does not grant a small number of non MOAB-class status effects with the power to affect specific bloon immunities:

There is one exception to these rules, Psi. Psi normally cannot target Leads or Purples, but giving Psi with Monkey Intelligence Bureau allows them to target those bloon types. This doesn't allow Psi to target Ceramics, however, and requires Level 7+ to do so.

Monkey Intelligence Bureau does not revoke a tower from retaining the Sharpening Stone buff, as MIB simply adds popping of all bloon types (e.g. Lead-Popping Power

) in a similar way to setting a damage type to Normal

to all attacks that create a Freeze

This upgrade is very expensive in concept, but it proves very effective at countering DDTs. Strong DPS towers whose weaknesses are only specific bloon types would strongly benefit from this upgrade. The majority of popular strategies often rely on MIB to reduce weaknesses against DDTs. Sometimes a MIB is used to allow energy-based Magic Monkeys to damage Purples, most specifically to survive the pre-blimp stage of Round 95. Another viable use is for allowing towers to damage Frozen Bloons in order to fix the negative synergy between sharp-based attacks and Ice Monkeys, specifically 0-1-2 Re-Freeze Ice Monkeys or Icicle Impale. On certain scenarios, an MIB is used to allow high-pierce explosives such as Bloon Impact to pop Blacks and Zebras versus high-density rounds.

No changes since Monkey Intelligence Bureau was first released in BTD6, although a few bug fixes were made in early versions of the game to address some unintended non-supported interactions.

Monkey Intelligence Bureau artwork in BTD6, as seen in the upgrades menu 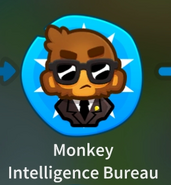 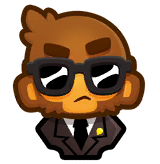