The Monkey Intelligence Bureau (BTD5) (sometimes abbreviated as MIB for short) is the third upgrade of Path 2 for the Monkey Village. It allows all the towers in the radius to pop any type of bloon. It does not necessarily grant M.O.A.B. Class Bloon popping power, but it allows all towers within its radius to pop Lead Bloons, Thermal Bloons, and Frozen Bloons.

However, with the BTD5 generation, Glue Gunners and Ice Towers still cannot slow or freeze M.O.A.B. Class Bloons, nor can it allow Bloonchippers to suck in every type of bloon. Also note that Road Spikes that don't come from a tower remain unaffected by the Monkey Intelligence Bureau. (Note that all Pineapples can pop Thermal Bloons within the MIB's radius.)

MIB with no crosspaths, in BTD5 Flash 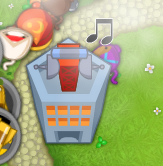 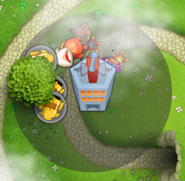 The large radius of a Monkey Intelligence Bureau

Retrieved from "https://bloons.fandom.com/wiki/Monkey_Intelligence_Bureau_(BTD5)?oldid=262159"
Community content is available under CC-BY-SA unless otherwise noted.