The Monkey Buccaneer is a tower introduced in Bloons TD 4. It is an all-rounder tower with a decent rate of fire, 1 shot per second for a good price ($510/$595/$650). Monkey Buccaneers are operated by a monkey. However, it can only be placed in water. Since some tracks do not have water, strategies involving Monkey Buccaneers will not succeed. Depending on the map, it may be able to solo several rounds with the Battleship upgrade. It also makes an appearance in Bloons TD 5, it can be placed in water as well as in the Portable Lake.

Monkey Buccaneer makes up to 8 appearances:

The Buccaneer returns in BTD6, functioning much the same as its previous incarnations. However, one key improvement is that the Buccaneer gains the ability to fire both cannons at once, allowing the tower to shoot in opposite directions and up to doubling its firepower.

The Monkey Buccaneer is classed as a Military Category tower.

The Monkey Buccaneer and all of its upgrades (left to right), excluding the Dreadnaught, in BTD4

Monkey Buccaneer on water, in the Flash version 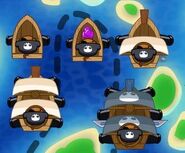 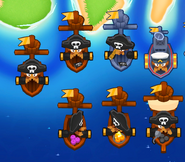