1 in Bloons TD Battles Mobile or

100 in BTD6. To prevent Monkey Boosts from stacking, this boost has a cooldown like an Activated Ability and has to recharge before the player can use it again. The countdown can be decreased in Bloons TD Battles Mobile using COBRA's Monkey Stim upgrade. When it is received as a bounty from the Monkey Knowledge Packs in Bloons Monkey City, you receive 5 free Monkey Boosts.

Use the Monkey Boost when your towers cannot defeat an incoming rush. The usage of the boost varies between towers, and it is recommended to understand the different situations in which your set up can beat with or without Monkey Boost.

Other than functioning like most other powers that allow the player to salvage a losing game, it also can be used late-game to boost your True Sun God to allow for the highest round.

Its appearance when playing a track on My Tracks

Using a Monkey Boost in BMC 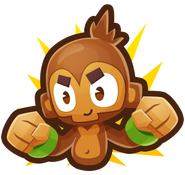 Using Monkey Boost in BTD6 (note the blue outlines on the corners of the map)
Community content is available under CC-BY-SA unless otherwise noted.